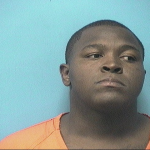 Identity theft is a Class B felony, according to Alabama law, and is punishable by up to 20 years in prison. The theft of property and unlawful breaking and entering a vehicle charges are Class C felonies, and carry a maximum sentence of 10 years.

According to his arrest warrants, the charges stemmed from a pair of 2015 incidents, during which Anderson allegedly broke into vehicles and stole items.

Prosecutors allege Anderson broke into an F-150 truck in Pelham on Aug. 23, 2015, and stole a Regions Bank debit card and a victim’s identity.

Anderson then allegedly broke into a 2010 Mercury Mariner in Alabaster on Sept. 6, 2015, and stole a victim’s identity, a purse, U.S. currency and a Capital One credit card.

According to court records, Anderson has a lengthy criminal history tied to Shelby County vehicle burglaries, including a 2015 conviction on a felony second-degree theft of property charge, for which he was sentenced to nine months in the Shelby County Community Corrections program.

He was serving his sentence when the alleged Pelham and Alabaster car burglaries occurred.

As of June 20, Anderson was being held in the Shelby County Jail without bond on the probation violation charge.