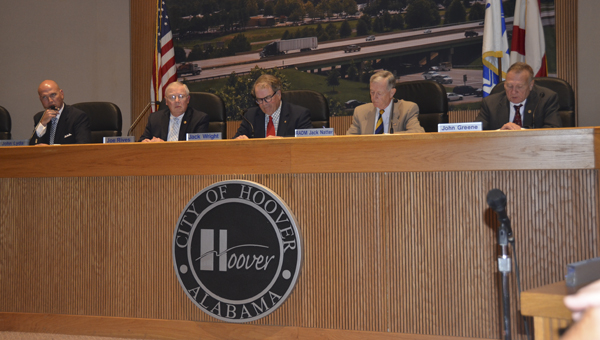 The Hoover City Council rejected a bid for fire department uniforms and accessories June 20 as it was the only bid received. (Reporter Photo/Emily Sparacino)

HOOVER – The Hoover City Council rejected a bid for fire department uniforms and accessories and authorized the mayor to negotiate with the company to set prices for the items at a June 20 meeting.

The bid, from Municipal and Commercial Uniforms and Equipment Inc. (MAC), was the only bid received after invitations to bid were mailed to 58 vendors.

“Theirs was the only bid received so, in accordance with state bid laws, we are compelled to reject the sole bid and authorize the mayor to negotiate with Municipal and Commercial to establish prices for these items not to exceed their bid price,” Hoover Director of Purchasing Ben Powell wrote in an email. “The Purchasing Department and Fire Department will conduct those negotiations and, upon conclusion, I/we will present the revised prices to the mayor for his review/approval.”

According to the bid price submittal sheet from MAC, the sum of prices for all items is $1,915.95, and the extended bid price total based on estimated annual quantity is $99,593.75.

In other business, the City Council approved an amended budget for Fiscal Year 2016 including changes to infrastructure, maintenance and police department expenses.

For the police department, the budget allots for the purchasing of equipment and supplies, such as an open vision c-arm live video X-ray system ($70,000), bleed control kits and cabinets for schools ($7,000), three radar speed trailers ($75,000) and Phantom 4 drone kits ($9,000). The expenses are covered by the drug fund.

Police Chief Nick Derzis said the equipment totals $232,000 and provides the department with “better tools to serve the public.”

•Approved a resolution following a public hearing declaring the weeds and grass on properties on Burning Tree Circle, Valley Station Circle and Mockingbird Lane to be a public nuisance and to be abated by the city of Hoover.

•Approved a resolution declaring properties on Trace Crossings Trail and Valpar Drive as public nuisances because of weeds and grass and to be abated by the city of Hoover.

•Approved an ordinance to vacate a portion of the RV Trace right-of-way for the erection of a public building. The ordinance states a sufficiently ample portion of the roadway will remain open to accommodate travel and traffic.

•Approved an ordinance authorizing the issuance of no more than $80,000,000 principal amount of general obligation warrants, series 2016.

•Set public hearings for July 18 at 6 p.m. to consider the following requests that come forward with a positive recommendation from the June 13 Planning and Zoning Commission meeting: 1) Brandon Jensen, Rockwell Hoover LLC, is requesting conditional use approval for an event center for social and corporate events and live entertainment (Noah’s Event Venue) to be located at 2505 International Park Lane. Rockwell Hoover LLC is the property owner, and the property is zoned PO Planned Office; 2) The city of Hoover is rezoning recently annexed property located at 1833 Burning Tree Circle, owned by Robert and Margaret Gornati, from Jefferson County R-1 to Hoover R-1 Single Family Residential District.