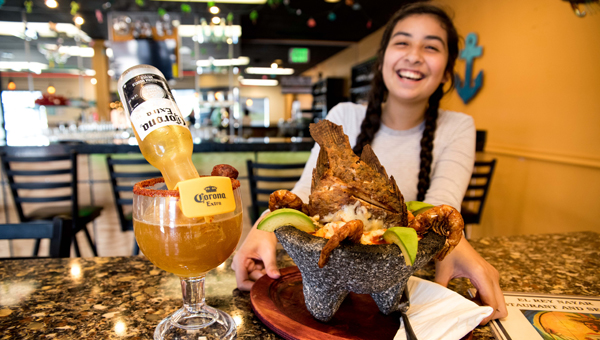 PELHAM— On the coast of the Pacific Ocean in Mexico there’s a small western state called Nayarit. Although the state is more than a thousand miles away, residents can experience its flavors and cultures at the newly open El Rey Nayar Restaurant and Seafood in Pelham.

Although they met in the Unites States, Gabriella and Samuel Catano both grew up in Nayarit, eating fresh seafood. As Pelham residents, Gabriella said they were waiting for a seafood place to open when they finally decided to open one themselves.

“I just want to have that taste here, so we just decided to have our own place,” Gabriella said. “It’s an adventure. I’ve never been in this business before.” 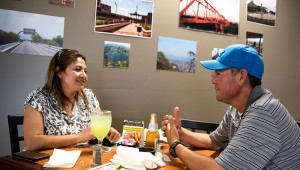 One of the walls of the restaurant is adorned with photos from Nayarit, Gabriella and Samuel Catano’s home state in western Mexico.

El Rey Nayar, located at 3569 Pelham Parkway in the old Jake’s Caribbean Café space, is serving up dishes the Catanos grew up eating with all varieties of tilapia, shrimp, scallops and more.

Gabriella said her favorite dish is Ceviches, which she described as a fresh, salad-like entree. It’s comprised of tomatoes, onions, cucumbers, cilantro and shrimp cooked in lime juice.

“Right now, we have lots and lots of people are saying they love it,” she said. “It’s different.”

While many people have eaten Mexican or Hispanic cuisine before, Gabriella said guests love the food because it’s so different—they can’t get it anywhere else.

She said one of the most popular entrées is Molcaje de Mariscos. It’s served in a grey rock stone dish adorned with grilled shrimp and sliced avocadoes. The dish features octopus, scallops, oysters, shrimp, crab and cheese cooked in a red tomato sauce. The entire thing is topped with a tilapia tail.

“We were just trying it to see what people think of it,” Gabriella said. “Because the rock stone dish is heavy I wasn’t sure if I put it on the menu, but people were asking for it.”

The restaurant also serves signature cocktails, such as a traditional mango tequilada. It’s a frozen drink made with mangos and a bit of spice. Gabriella said it’s popular with customers.

Living right across the street, Gabriella said El Rey Nayar’s location is perfect, allowing her to be there for her kids while also managing the restaurant. Traffic on U.S. 31 also gives El Rey Nayar good visibility.

Her family is also involved in the restaurant, making it a true family affair. Gabriella and Samuel’s daughters Emilia and Judy, along with Gabriella’s niece and sister, all help out in their spare time.

Overall, Gabriella said her goal is to make the restaurant popular in Pelham and to be in business for a long time.

“I’ve been working in a restaurant for so long, but not my own one. It’s a lot of responsibility on my own, but I’m enjoying it. I feel that I can do it,” she said. “Everyone is welcome. We just want to share our culture with our community.”