Handley has lived in Columbiana for 37 years and served on the City Council for four years prior to being elected to a four-year term as mayor in 2012. 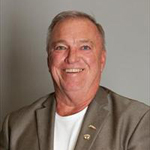 “I originally ran for Mayor because there were things the city needed and deserved,” Handley wrote in a June 17 press release. “My vision was for Columbiana to ‘be all she could be.'”

Handley said his original vision included a new senior center with increased senior activities; a public transit system for the inner city area; developing faith and trust in the mayor and council; a user-friendly City Hall; developing local entertainment opportunities; attracting new businesses to Columbiana; reestablishing close working relationships between the city and county governments, between the city and surrounding cities and between the city and its schools; and to address and decrease the illegal drug issues Columbiana faces.

“After the 2012 inauguration, we focused Columbiana in a different direction,” Handley wrote. “The main focus was on unity between the council and mayor on behalf of our city. Since 2012, all major decisions regarding Columbiana have been a group effort.”

The establishment of the trolley transit system, the completion of the new Columbiana Senior Center and expansion of senior activities and establishing accessible resources for an illegal narcotics investigation division within the Columbiana Police Department are among accomplishments Handley is most proud of, he said.

“There has been great effort in improving each city department, both in infrastructure, equipment and quality of workplace,” he wrote. “This in itself had led to a more congenial, user-friendly City Hall. The illegal narcotics issues all cities face is an ongoing battle, we are now better equipped to fight this battle. Several planned illegal narcotics raids have resulted in numerous felony arrests and a dramatic decrease in illegal activities within Columbiana.”

Handley said the city has seen growth in the business sector, and the downtown area is alive again, noting Columbiana was recently selected to be a designated city in the Main Street Alabama initiative.

“This designation is a result of citizens, merchants and professionals collaborating with the city administration to move Columbiana forward,” Handley wrote.

If re-elected, Handley said his vision includes plans for: A new city park, Old Mill Square, which will house the Shelby County Arts Council and various entertainment venues along with outdoor green space and a new city garage; continued updates on the outdated sewer system; continued paving projects within the city; maintain a strong focus on our illegal narcotics division; and working with the Main Street initiative to improve the ambiance and business climate in Columbiana.