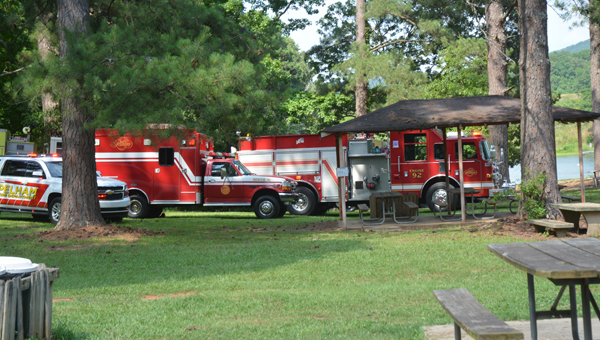 Responders arrive on the scene of a minor incident at Flipside Watersports in Oak Mountain State Park. (Reporter photo/Baker Ellis)

PELHAM— Pelham paramedics and firefighters were on the scene at Oak Mountain State Park the afternoon of June 21, responding to a minor incident at Flipside Watersports.

According to Capt. Chris Carpenter, a woman came off an inner tube while being pulled in the lake. By the time the responders arrived, Carpenter said Flipside personnel had already brought the woman back to shore on one of their jet skis.

“We did have to respond, but it wasn’t anything caused by wakeboarding or inter-tubing or anything like that,” said Flipside operator Jeremy Talbot. “It was an unknown medical condition.”

Talbot said they simply responded as they would to any situation.

The woman was able to climb onto the jet ski under her own power, according to Carpenter, but she was still transferred to a hospital for further evaluation.