COLUMBIANA – A 19-year-old Helena man has been released from the Shelby County Jail on a $30,000 bond after the Alabaster Police Department arrested him and charged him with a felony rape charge. 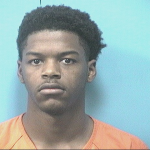 The APD arrested Samuel Woods III, who lists an address on Old Cahaba Trace in Helena, on June 17 and charged him with one felony count of second-degree rape.

Second-degree rape is a Class B felony, and is punishable by up to 20 years in prison if convicted.

According to his arrest warrant, Woods allegedly engaged in sexual intercourse with a female victim who was between the age of 12 and 16 while Woods was “16 years or older and at least two years older” than the victim.

The alleged incident took place in September 2015, according to the warrant.

According to the Alabaster Police Department, the case is still an ongoing investigation.

Woods was released from the Shelby County Jail on a $30,000 bond the day after he was arrested, according to jail records.