The passenger of a vehicle involved in a high-speed chase with Shelby County Sheriff’s Office deputies June 22 is facing a felony charge.

Tracy O’Neal Jones, 23, of Birmingham has been charged with first-degree receiving stolen property after authorities identified him as the passenger of a stolen 2001 Lincoln Navigator that 21-year-old Isaiah Core III of Trussville was driving as the pair led law enforcement on a vehicle pursuit that ended in Core being fatally shot. 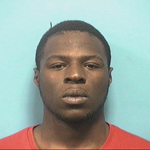 The pursuit started at about 2:30 a.m. near U.S. 280 and Bowling Drive and ended on Oporto Madrid Boulevard South in Birmingham, where Core allegedly made a life-threatening attempt to injure officers with the vehicle and was subsequently shot by an SCSO deputy.

The deputy first observed the vehicle while patrolling an apartment complex, where numerous break-ins and burglaries have been reported recently, according to an SCSO press release.

“The deputy attempted to make a traffic stop on this vehicle and a pursuit began when the driver failed to pull over in response to the deputy’s emergency lights and siren,” a June 22 release read. “The vehicle fled the scene at a high rate of speed and the chase ended when the driver exited Interstate 20 at Oporto Madrid Boulevard (South) in Birmingham, Ala.”

Once Core stopped the vehicle, sheriff’s deputies and assisting officers issued verbal commands to Core and his passenger to exit the vehicle to determine why they fled from officers.

Core was transported to UAB Hospital, where he was pronounced dead at 3:15 a.m. June 22, according to the Jefferson County Coroner’s Office.

One deputy sustained minor injuries during the incident.

The deputy involved in the shooting has been placed on administrative leave until the incident is fully reviewed.

“Placing an officer on leave after a traumatic event is a standard practice and not a reflection of the deputy’s decisions,” the release read. “External and internal reviews will be concluded prior to the deputy returning to duty.”

Jones was not injured and was taken to the Shelby County Sheriff’s Office for questioning.

The vehicle Core was driving was reported stolen in Birmingham and displayed a switched tag, necessitating Jones being charged with first-degree receiving stolen property, a Class B felony.

A stolen handgun was recovered from inside the vehicle and marked as evidence.

The Jefferson County Sheriff’s Office is conducting the investigation of the shooting.

“While I realize the circumstances under which Mr. Core died, I cannot help but wish his family my sincere condolences,” Shelby County Sheriff John Samaniego wrote in a release. “I wish them peace as they struggle to find resolution with their loss.”

Samaniego expressed thanks to the law enforcement officers from other local agencies that assisted the SCSO in the case and said he was thankful they were not injured.