Vincent remembers the life of a local hero 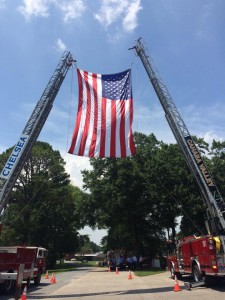 Fire departments from multiple counties and cities came out to celebrate the life and service of Thomas Zopfi IV at his funeral service June 17. Chelsea and Cahaba Valley fire trucks share a giant American flag to honor Zopfi at the cemetery in Vincent. (Contributed)

Genie Allen, a retired EMT who worked with Zopfi and knew him as a close friend, described him as a local hero.

“This boy did so much in his short life that he was a Vincent hero because he gave willingly,” Allen said. “This loss has left a large hole in this town.”

Allen said Zopfi was receiving regular dialysis treatments and waiting on quadruple-bypass heart surgery before his death. She said his health never stopped him from helping people.

“If there was a need, Tom would find a way to do it,” Allen said.

She said Zopfi was a single dad who would do anything for his daughter and was very involved at her school and in the community. She said his daughter will be entering the seventh grade this year and living with his sister and her husband.

Smiley said Zopfi wanted to be sworn in, which is rare in a volunteer fire department, but Smiley said he would swear him in. Due to ailing health, Zopfi wasn’t able to make it to the station and was never sworn in. Smiley said the department plans to plant flowers around the flag pole in front of the station and hang a plaque dedicated to Deputy Chief Zopfi.

“He was never sworn in, in life,” Smiley said. “But he earned it and has that title no matter what.”

Smiley said Zopfi was an amazing man who ‘loved helping people more than anything.’

Allen said even on his worst health days, he would be at the fire department helping young kids training to be firefighters and paramedics.

One of his mentees, Bobby Greene, was recently hired by the Harpersville Fire Department and said he could not have asked for a better mentor.

Greene started volunteering at Vincent Fire and Rescue right after graduating high school in 2014 and said without Zopfi he would not have gotten through fire school.

“He took me and a couple of others under his wing and taught us, trained us and helped us with anything we needed,” Greene said. “I loved him deeply.”

Greene said even when Zopfi was hurting, he was trying to do stuff at the station and fight fires with them. Greene said he and other firefighters had to tell him to take it slow and rest.

“The man didn’t deserve anything he was given,” Greene said. “He fought it harder than I’ve ever seen.”

Allen recalled Zopfi’s tenacity and described him as “a man who didn’t know how to say the word no.” She said if anyone needed anything, such as a young firefighter who needed help studying for a test or if his daughter’s school needed something, Zopfi would be the first one there.

“He knew no tireless end if a kid needed help studying,” Allen said. “If they needed a mother to do something at his daughter’s school, Tom was there.”

Zopfi’s funeral service was a celebration on the impact he left on so many people’s lives. Allen said Zopfi’s casket was draped in an American flag and rode on a Vincent fire truck to the cemetery, followed by fire trucks from all around the state, and one from Florida that came out to be a part of the processional.

“I saw cities I knew and recognized, and some I have never even heard of,” Allen said.

She said Zopfi was a member of the Our Lady of the Lake Catholic Church, and the church’s Knights of Columbia were in full dress, swords drawn at attention for Zopfi. Allen said two fire engines hung a giant American flag and planes flew overhead at the graveside.

She said multiple people left memories, messages and prayers for Zopfi and his family on Facebook, and some changed their profile pictures to a graphic reading, “Rest in Heaven, Deputy Chief Zopfi.”

“He left a legacy that will go on a long long time,” Allen said. “He didn’t just touch people in his community but had a wide reach to people from all over.”