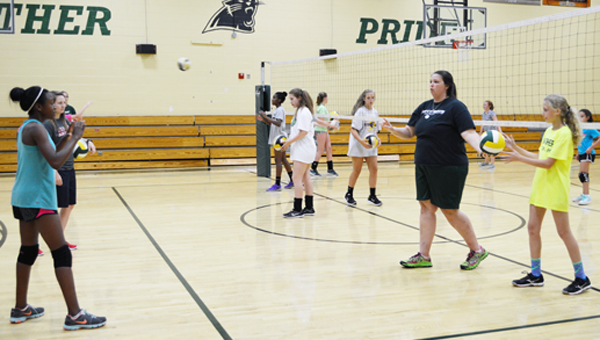 PELHAM— Despite the summer break, the gymnasium at Riverchase Middle School was alive with activity June 20-22 as students learned the fundamentals of volleyball at a youth camp.

Jones and PHS head volleyball coach Perry Robinson have been hosting the Youth Volleyball Camp for three years together as a way to build Pelham’s program.

The coaches get students entering grades two through six interested in the game before they reach the middle school level. Then they focus on the fundamentals: Passing, setting and serving.

It also allows both coaches to get to know the students, Robinson added. He said they get to put faces with names and invite the students out to watch matches at the middle and high school.

They also have some of the middle and high school players at the camp to help out with the younger students.

“They get exposure to a game that’s different from almost anything else they will do,” Robinson said. “We just want them to come see it and think, ‘Hey, maybe I want to pursue that and keep doing it.’”

The students are divided into two 90-minute sessions each day based on grade. The younger students start with catching, and then move onto footwork, hand-position, how to move and how to catch.

Jones said the overall goal is just to gain exposure for the sport among the younger students. Introduction is key, Robinson added.

The duo plans to continue hosting the camp and getting people involved. They’ve had many students come back year after year and said they hope the trend will continue.

“We’ve seen how they’ve grown,” Jones said. “They know us personally. That’s what we want to be here for, just to encourage them to come play.”

A Helena summer reading program participant weaves through the obstacle course at the Alabamians in the Olympics interactive program on... read more