COLUMBIANA – A 32-year-old Montevallo woman is being held in the Shelby County Jail on bonds totaling $10,000 after Shelby County Jail officials said their full-body X-Ray machine allegedly caught her trying to smuggle methamphetamine into the jail. 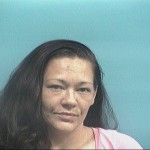 The Montevallo Police Department arrested Rachel Elaine Elledge, who lists an address on Church Street in Montevallo, on June 8 on an unlawful possession of a controlled substance charge. The arrest came after MPD officers served a Shelby County Drug Enforcement Task Force warrant on the suspect.

Task Force Commander Lt. Clay Hammac said as Elledge was being booked into the Shelby County Jail, corrections officers discovered she allegedly was attempting to smuggle methamphetamine into the jail.

“Elledge was unsuccessful in smuggling narcotics into the jail due to the use of the jail’s full body X-Ray machine that each inmate passes through prior to entrance,” Hammac wrote in an email.

Hammac said corrections officers did not immediately charge Elledge with a promoting prison contraband charge, and instead tested the substance to ensure it was methamphetamine.

Shelby County Jail Commander Capt. Jay Fondren said the jail has had the X-Ray scanner in place for about three years, and said all inmates pass through it before they are booked into the jail.

“It serves as a huge deterrent,” Fondren said, noting several inmates have admitted to possessing contraband upon seeing the machine. “We hope that it has deterred a lot of unwarranted items from coming into the jail.

“We see more people attempting to smuggle drugs and tobacco into the jail than we do weapons,” Fondren added. “It’s just one of the many tools we use, but it doesn’t replace the full searches our deputies perform.”