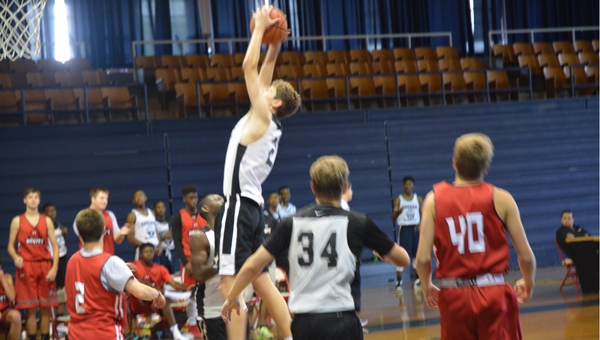 The Helena Huskies beat Hewitt-Trussville in a June 24 matchup at Samford University by a score of 55-54. (Reporter Photo / Baker Ellis)

The Helena Huskies boys basketball team has been busy this summer.  The Huskies, like most basketball teams around the state, have been taking part in summer play dates all through June, and wrapped up the month-long stint at Samford University on June 24. Helena took part in seven summer play dates over the month, hosting one and travelling to Birmingham-Southern, Alabama, Samford and Wallace-Hanceville in addition to Oak Mountain and Gardendale High Schools.

Helena head coach Chris Laatsch, like other coaches in the area, has been using the summer camps to get an early look at what his team will look like in the winter.

“I think there are two things we’re trying to accomplish,” Laatsch said. “This year, for us, we lost nine people off last year’s team. So there are a lot of positions that are open, and we’re trying to see if guys can take those spots and own them. And as a coach you’re trying to figure out how your team needs to play. Since we can’t recruit, you kind of take what you got and see what your kids can do and what system fits them best. You have to find what system fits best, and then finding the best parts for that system.”

Chief among those nine seniors that graduated from the 2015-16 team that finished 22-10 were Paul Brown and Jaylen Harris, a pair of guards that averaged 16.7 points, 4.5 rebounds and 3.5 assists per game between them. Returning for Helena in 2016-17 will be the younger Brown, Jon, who will be a senior, as well as rising junior Justin Stuckey. Jon Brown and Stuckey averaged roughly 24 points, 9.5 boards and four assists per game last season, and will be important pieces for the Huskies this season.

With the younger Brown and Stuckey returning to lead this Helena team, there are still a number of positions available for the taking, according to Laatsch, and he feels that that competition has led to a successful summer thus far.

“Absolutely,” Laatsch said. “I really like the way we’re playing, I feel good about our system. We still have some positions open for guys to go grab. That ought to be good for this offseason, guys see an opportunity, and if they want to play there are plenty of openings for them to prove they’re the right guy.”