PELHAM— A 44-year-old Deatsville man is facing felony charges of trafficking stolen identities and possession of a forged instrument after he was arrested by the Pelham Police Department June 23, according to court documents. 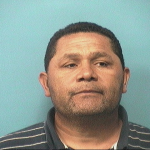 Francisco Javier Peralta-Torales, who is allegedly in the country illegally, was charged after allegedly presenting eight U.S. treasury checks with eight different individuals’ identities in the 2200 block of Pelham Parkway on June 22.

The suspect was also charged with three counts of fourth-degree possession of a forged instrument after he was allegedly found in possession of three U.S. treasury checks made payable to different individuals.

Peralta-Torales, who lists and address in the 400 block of County Road 68 in Deatsville, is currently being held at the Shelby County Jail for bonds totaling $165,000.

According to court documents, the District Attorney’s Office recommended a higher than usual bond for the following reasons: