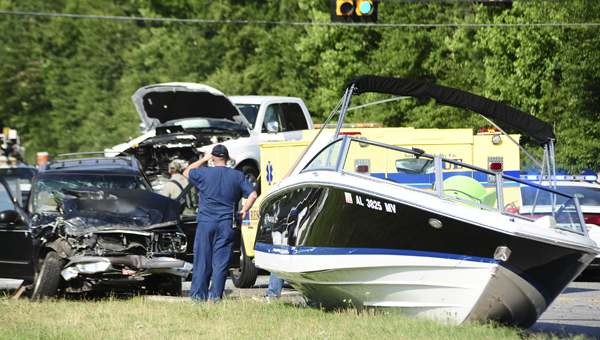 Minor injuries were reported from a crash involving a Dodge pick-up truck pulling a boat and a Ford Explorer at the intersection of Alabama 25 and Shelby County 47 in Columbiana on the afternoon of June 24. (Reporter Photo/Emily Sparacino)

COLUMBIANA – One person sustained minor injuries in a crash involving two vehicles, one of which was pulling a boat that slipped off its trailer, at the intersection of Alabama 25 and Shelby County 47 in Columbiana on June 24.

The crash happened at 4:54 p.m. between a Dodge pick-up truck pulling the boat and a Ford Explorer, resulting in brief traffic delays in the area.

The Columbiana Police and Fire departments and Southeast Shelby County Rescue responded to the scene.