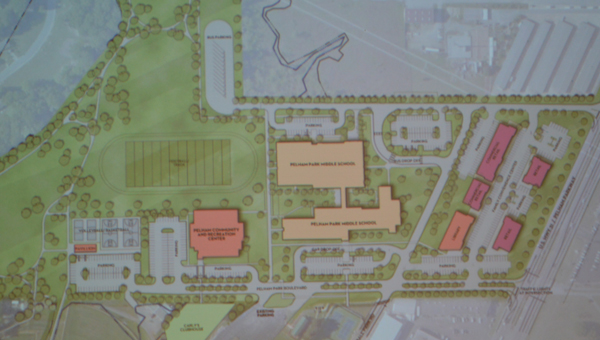 PELHAM— Discussions of Pelham’s future city center at a June 23 town hall meeting resulted in questions related to the allotted retail section, which would be located adjacent to the new library.

Residents said they were concerned with the kind of commercial retailers that would be allowed to move into those buildings as well as the existing vacant locations around the city.

“What made you want to do retail shops there in the front, and what types of shops are you looking to bring in there?” resident Brandon Black asked.

Waters said the city was conducting a “Gap Analysis” to evaluate which businesses are not in Pelham that should be. He said city leaders would be able to decide what businesses would be appropriate being adjacent to the library and middle school.

A new conceptual layout showed two retail spaces running facing U.S. 31 near the front entrance of the city center, with an additional two buildings across the street next door to the library.

Waters said the spaces facing U.S. 31 are valuable and would help offset the cost of the development.

The types of businesses that would be located there would also be related to family convenience, according to City Council President Rick Hayes. When families are out utilizing the trail system, the parks, the recreation center or library, he said they’ll need related retailers.

“We spent a lot of time with our attorneys on restrictive covenants so the only thing that could be there are the kinds of business that fit,” Hayes said. “The types of businesses like, potentially, Alabama Outdoors or a Hibbitt (Sports).”

Hayes added that the plan is to recruit a family restaurant for the building across the street from the library facing U.S. 31. He and City Council member Beth McMillan commented on the necessity of having a restaurant in the city center.

Having retail areas in the city center will also generate enough traffic flow for the area to qualify for a traffic light at the intersection of U.S. 31 and Pelham Park Boulevard, formerly Ball Park Road.