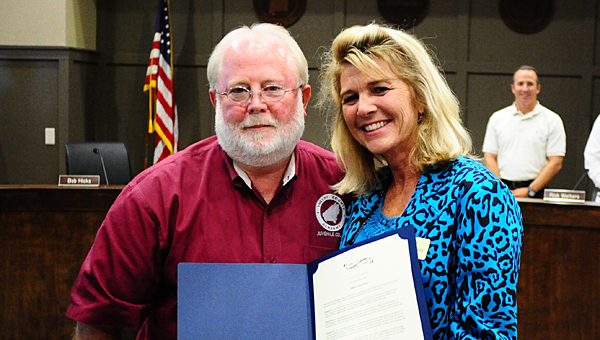 ALABASTER – After more than 30 years of working with the Shelby County Juvenile Court, John Miller has mixed feelings about stepping away at the end of June.

While he will have more time to dedicate to family and friends during his retirement, Miller will be stepping away from what he said is a job second to none.

“It’s the best job in the world to me, getting to meet hundreds of kids over the years and seeing them go on to great successes,” Miller said. “It means a lot to me.”

During a June 27 City Council meeting, Alabaster Mayor Marty Handlon presented Miller with a proclamation honoring his 34 years of service to the Juvenile Court, and touted him for his involvement in the city over the years.

Miller launched his career with the Shelby County Juvenile Court in the early 1980s, and quickly rose through the ranks from college intern volunteer to probation aide, probation officer and ultimately chief probation officer in 1985.

During his tenure, Miller has served as an advocate for Shelby County children, working closely with the Shelby County Commission to build the current Juvenile Detention Facility in Columbiana.

He worked to establish the Juvenile Courts Deferred Prosecution program, through which first-time juvenile offenders are able to complete a six-month process including drug education classes and random drug testing. Juveniles who complete the program have their charges dropped, avoiding a permanent record.

Miller played a key role in establishing the first Boys and Girls Club of Shelby County, served on the planning committee for the Montevallo Middle School Leaders of Tomorrow and has served as a foster parent to many children over the years.

Miller will retire as chief probation officer on June 30, and longtime Juvenile Court employee LeAnn Rigney will step into the role.

“John possesses the rare combination of balancing professional excellence and wisely extending personal compassion,” Handlon said. “He used his position to rebuild lives, change futures and make an impact in the life of each child he served.”

Miller said the Juvenile Court has developed a strong relationship with Alabaster over the years.

“Mayor Handlon, you are the first mayor who sought out our office and got involved with Juvenile Court programs,” Miller said. “This is incredible. I can’t tell you what it means to me to be recognized tonight.”