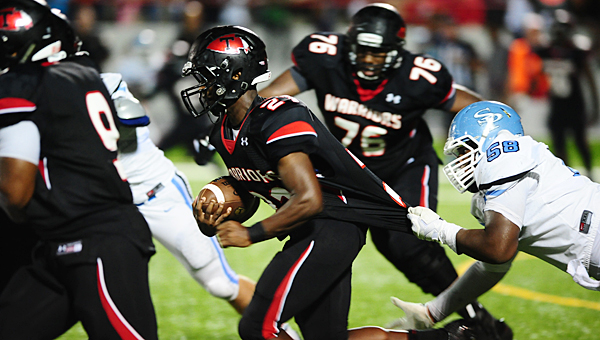 After seeing many improvements during the 2015 season, the Thompson Warriors will look this season to return to the playoffs for the first time since 2006. (File)

ALABASTER – The Thompson High School Warriors football team will look to build on last season’s improvements while facing a familiar gamut of stiff competition this fall.

The Warriors will open the 2016 regular season on Saturday, Aug. 27 with a neutral site matchup at Ladd-Peebles Stadium in Mobile against the Godby High School Cougars from Tallahassee, Fla.

From there, the Warriors will take to the road for back-to-back region games against Tuscaloosa County on Sept. 2 and Mountain Brook on Sept. 9.

Thompson’s first home game of the season will be on Sept. 16 against region foe Oak Mountain before the Warriors travel to cross-town rival Pelham High School on Sept. 23 to take on the Panthers in a non-region matchup.

On Sept. 30 and Oct. 7, the Warriors will return home to take on the Vestavia Rebels and the Spain Park Jaguars, respectively, in region games.

On Oct. 14, Thompson will travel to Class 7A, Region 3 newcomer Huffman in Birmingham before returning home to Larry Simmons Stadium to host Hoover on Oct. 21 and non-region foe Hillcrest Tuscaloosa on Oct. 27.

After the Warriors finished with a 5-5 record in 2015, which was much-improved from the 0-10 campaign in 2014, they are looking to continue the rebuilding effort into the 2016 season and return to the playoffs for the first time in a decade.

The following is Thompson’s full 2016 schedule: