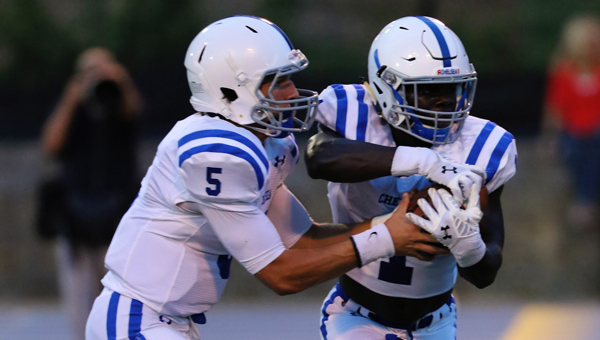 Matt Marquet and Zalon Reynolds, who last year combined for more than 3,000 yards of offense, will lead Chelsea in 2016. (File)

Football season is, incredibly, less than two months away. It is less than two months until those hallowed fall Friday nights come back into our lives, which is a very exciting thing. With that in mind, we need to properly prepare for what is heading our way. We need to have at least a cursory knowledge of the product each of these teams in the county are going to put on the field for us over the coming months. How do we do that? With some Way-Too-Early 2016 Shelby County football predictions!

So, for part one of the Way-Too-Early football predictions for 2016, we’re going to take a look at the Chelsea Hornets.

Chris Elmore took the head-coaching job at Chelsea in 2013, and every year since the Hornets have trended upward. From a 4-6 finish his first year to a 6-4 finish in 2014 to a 7-4 finish and a playoff berth in 2015, Chelsea has continued to incrementally improve under Elmore’s tenure. Now, as Chelsea moves into a new region in 2016, it’s time to see if Chelsea can take another step forward.

Fortunately, on the offensive side of the ball Chelsea returns a number of key weapons to help take that next step. Chief among those weapons are senior quarterback Matt Marquet, senior running back Zalon Reynolds and senior wide out Jay Vickers. Last year, in Marquet’s first full year as a starter, the athletic gunslinger passed for 1,255 yards and eight scores and ran for an additional 784 yards and scored 11 more times on the ground and was named the 2015 All-County Second Team quarterback. Marquet, a key contributor on Chelsea’s basketball team as well, is simply a gamer. With roughly a year and a half of varsity experience under his belt, it’s never a good idea to count Chelsea out with him on the field, and his return is huge for this offense.

Reynolds on the other hand will take over the primary running duties this year in the wake of AJ Jones’ graduation. Reynolds is not a tall runner, standing roughly 5-feet-10-inches in height, but is the strongest player on Chelsea’s’ roster, bar none, according to Elmore, and has the combination of vision, speed and power to be a high-end prep back in his final year. Last year as a junior Reynolds’ split time almost evenly with Jones and still rushed for over 900 yards. In this, his swan song campaign, he will look to leave his mark on the Chelsea program.

Vickers as well is returning after a productive junior year. The leading returning option in the passing game, Vickers hauled in 33 catches for 547 yards and four scores last year. He, like Reynolds, is not a big target, but does have 4.5 40 speed and is dangerous in the open space. Between the leadership and ability of these three, the Chelsea offense is in position to be more productive than ever.

While the offensive line will have to replace Ben Haskins, Rod Tyson and Joey Chiofalo from last season, there are a number of linemen ready to step into those roles. Houston Needham is back for his senior year, and Nathan Wood, who started the first half of the season before a concussion against Helena on Sept. 25 sidelined him for most of the year, is back as well. Jacob Christian, who came on in Wood’s absence, also returns, as do Kevin Fine and Brett Bearden.

The defense on the other hand will see a number of new faces, and nowhere will that be more apparent than at the linebacker position. Justin Painter, David Hardenbaugh and Blake Travelstead, each of whom were three-year starters, have all graduated, leaving a gaping chasm of inexperience in the middle of the field. Regan Wortham, a starting defensive end last year, is making the transition to the linebacker unit, which will include Hunter Offord, Will Shaw and Jalyn Miller. How that linebacker unit progresses will be crucial to the success of the Chelsea defense.

Potentially even more important than replacing the three linebackers, however, will be replacing Michael Waller in the secondary. According to Elmore, Waller is the guy that Chelsea will miss the most because of his knowledge of Chelsea’s defensive schemes and his ability to get teammates in position. Bryson Hardy, Chelsea’s top returning corner, is moving back to cover Waller’s free safety slot, and the rest of the Chelsea secondary will see mostly new faces as well.

Now, for a Way-Too-Early prediction: Chelsea has the offensive pieces to put points on the board as it did last year when the Hornets averaged 31.7 points per game. The question that has to be answered is how will the defensive unit come along in the wake of so much transition? We’ll tell you. Elmore and his defensive coordinator Zeb Ellison bring this group along admirably, and Chelsea gets back into the playoffs with a 6-4 regular season record and gets that elusive playoff win that has eluded the program since 2007.

A camper goes up for a shot during a summer basketball camp the week of June 27. The camp was... read more