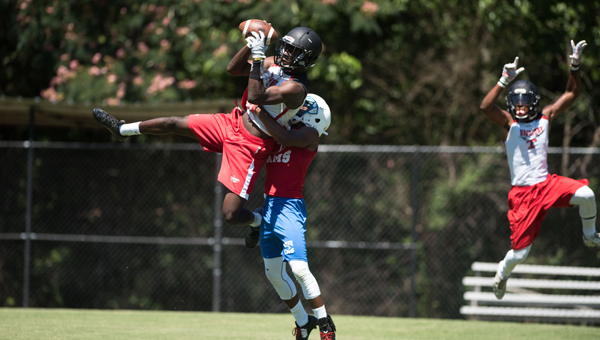 A Thompson player goes high in the air to catch a pass during the Warriors’ 7-on-7 game with Carver-Birmingham on June 30. (Reporter Photo/Keith McCoy)

HOOVER – In the beating, intense heat of mid-summer, 21 6A and 7A schools descended on Hoover High School to take part in the USA Football 7-on-7 ALFCA Championships on June 30. Among those 21 schools were Spain Park, Thompson and Chelsea, each of which played five games on the day. While the actual game results in the 7-on-7 format are not something that any coach worries about, the theme between what each coach wanted to see from the 7-on-7 games was similar.

“I want to see our kids compete,” Spain Park head coach Shawn Raney said. “We lost a game today (against Gadsden City) playing dumb football, you try to get that fixed here where it doesn’t count so that doesn’t happen to you in the fall when it does. But just to see our kids compete. This isn’t real football, we don’t treat it like it is, but there are a lot of situations here that you can learn from.

Spain Park, which played in the 7A state title game last season, is replacing a number of key players from that 2015 team. Quarterback Joey Beatty, linebacker Perry Young, running back Wade Streeter and defensive end Jonah Tibbs are all gone, leaving some holes for the Jaguars to fill. The quarterback position is currently a two-way battle between rising senior Hunter Howell and rising junior Braxton Barker.

“We lost a lot of key players off last year’s team,” Raney said. “The kids that we’re asking to step up have to step up and fill those roles.”

Thompson head coach Mark Freeman can relate to what Spain Park is experiencing this summer, as the Warriors also have to replace a quarterback, running back, stud defensive lineman and linebacker as well. The Warriors, which finished last season 5-5 after going 0-10 in 2014, have trended dramatically upward since Freeman’s arrival in December of 2014. His message from the 7-on-7 competitions was similar to Raney’s.

“We just want our kids to compete, all day every day,” Thompson coach Mark Freeman also reiterated. “We’re really young. We have a quarterback who will be a 10th grader next year, our receivers are really young, we have two young linebackers, so this is a great day for us just because we get some work against someone other than ourselves. And at the end of the day we’re going home and not worrying about anything but our effort.”

Freeman also said his team needs to continue to improve in the weight room, and that the Warriors are 12 months into a 24-month plan to get back to where they need to be from a strength perspective.

Chelsea, the lone 6A school from the county to take part in the 7-on-7 work, is not replacing as many offensive pieces as Spain Park and Thompson are, but are on the defensive side of the ball. Chelsea head coach Chris Elmore, like Freeman and Raney, said all he wanted to see from his team on the day was competitive energy.

“It sounds like a cliché, but we just want to compete,” Elmore said. “I don’t get caught up in what our record is, I just want to see that we’re battling every play, that our effort is at a high level, and for the most part it has been.”

Chelsea opens the season on Aug. 19 at in-county opponent Oak Mountain. Spain Park opens on the same day at Gadsden City while Thompson will start the year on Aug. 27 against Godby (Fla.). 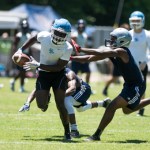 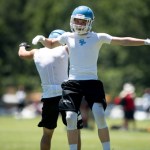 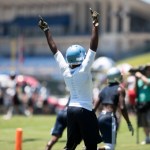 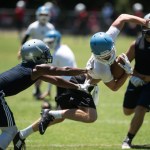 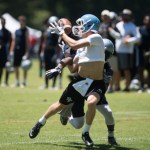 A Spain Park player tries to look in a pass. (Reporter Photo/Keith McCoy) 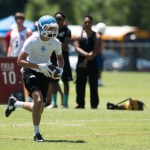 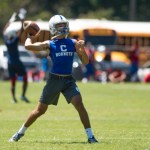 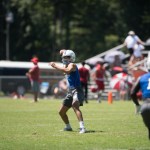 Matt Marquet looks towards Zalon Reynolds as he prepares to release a throw. (Reporter Photo/Keith McCoy) 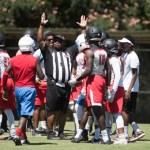 A referee signals a touchdown during Thompson’s 7-on-7 contest with Carver-Birmingham. (Reporter Photo/Keith McCoy) 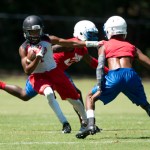 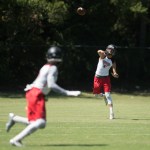 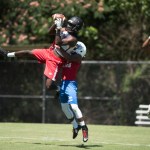 A Thompson player goes high in the air to catch a pass during the Warriors’ 7-on-7 game with Carver-Birmingham on June 30. (Reporter Photo/Keith McCoy) 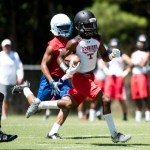 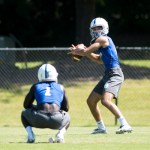 Chelsea’s Matt Marquet makes a toss downfield while running back Zalon Reynolds crouches in front of him. (Reporter Photo/Keith McCoy) 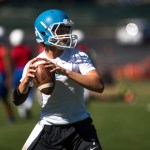