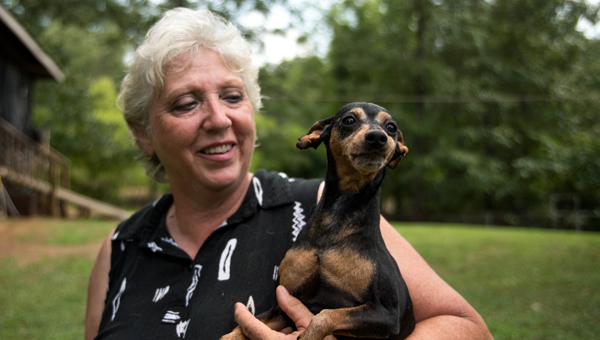 2nd Chance Animal Sanctuary owner Sandra Shaffer holds Jada, a black and brown Min Pin that is one of more than 40 dogs currently living at the sanctuary. (Reporter Photo/Keith McCoy)

BLOUNT COUNTY – Barks break the morning quiet at 2nd Chance Animal Sanctuary as owner Sandra Shaffer steers her golf cart past a line of dog kennels up the hill from her house June 16.

The dogs see her approaching during her morning rounds. The sound of gravel grinding against the cart’s rubber tires reaches their ears before Shaffer greets each of them by name.

A white-and-red pit mix named Reba––she’s a “redhead,” Shaffer says––does an excited dance atop her plastic doghouse, her tail wagging furiously, as Shaffer stops to talk to her.

“She’s a sweet baby,” Shaffer says of Reba, a nearly 7-year-old dog she rescued from a busy intersection where someone had left her.

A few yards away, a brindle pit mastiff named Ricochet lets out a series of hoarse, clipped sounds to draw Shaffer’s attention.

Before his arrival at the sanctuary, Shaffer said Ricochet’s former owners tried to de-bark him by shoving a pipe down his throat to rupture his vocal chords.

He also was shot in one of his front legs. The bullet zigzagged its way through the leg without hitting a bone, which is why Shaffer chose the name Ricochet for him.

“He is the sweetest,” Shaffer says, stroking his streaked fur.

Reba and Ricochet are two of many animals that have found refuge at 2nd Chance Animal Sanctuary, one of only a few no-kill sanctuaries in Alabama, and a non-profit organization “dedicated to advocating for the safety and well being of all domesticated animals.”

Shaffer is founder and president of 2nd Chance and operates it mostly by herself on a daily basis with minimal outside help.

Currently, she cares for about 46 dogs, 15 cats, five horses and a variety of other animals living on her 16-acre property in rural Blount County.

Many of the animals are awaiting adoption; others are fixtures at the sanctuary. Regardless of their status, Shaffer cares for all of them.

As a no-kill sanctuary, 2nd Chance harbors animals until they are adopted or until they have lived out their natural lives; no animal is euthanized because of space issues at the sanctuary.

With a steady influx of animals and a not-so-steady flow of donations, however, Shaffer is facing a funding dilemma she can’t conquer alone.

She isn’t giving up, and brushes off the idea some people have suggested to her of retiring from running the sanctuary.

“You don’t retire from this type of work,” Shaffer says. “This mission is my life.”

Shaffer has been involved in animal rescue for about 37 years.

“I had been doing rescue all of my adult life,” she said. “There was a time when I left this earth and came back. It was June 30, 1979, and when I came back I knew what I was supposed to do, and I have been doing it ever since.”

Shaffer opened 2nd Chance Animal Sanctuary and secured its non-profit status in 2006. She receives no government funding, no tax dollars and no other support aside from public donations; however, she makes the rules at her sanctuary, she said.

In 2010, she moved from a location she was leasing in Warrior to the property in Blount County.

The family that built the original house on the property in the 1970s showed horses and utilized some of the land for a practice arena.

The most recent owner before Shaffer used the property only for deer hunting. Converting the land into an animal sanctuary and a full-time homestead has been an ongoing process for Shaffer, who wears the hats of primary groundskeeper and animal caregiver.

The 16-acre spread includes a house, a barn, a manmade pond, dog kennels and a cat facility known as a cattery.

When she moved to the property, Shaffer had about 85 dogs and 17 cats, ducks she inherited with the property and other miscellaneous animals, including potbellied pigs and rabbits.

She now has 46 dogs, 15 cats, between 20 and 30 Muscovy ducks, five horses, two donkeys (one of which is a half-donkey, half-zebra mix) and one rabbit.

Her pond is stocked with catfish, bream and bass.

Shaffer takes in animals that have been abandoned or that are about to be euthanized at a shelter.

“All of my dogs would be dead if I didn’t have them,” she said.

She does not take animals surrendered by their owners, and she does not pick and choose animals for her sanctuary based on whether she thinks they are good candidates for adoption, she said.

“I have adopted out 9-year-olds,” Shaffer said.

Most of the cats at 2nd Chance are available for adoption, as are the dogs, although some are considered seniors.

The work of Shaffer’s hands––and heart––is evident in the organization of 2nd Chance and the quality of life all of the animals enjoy there.

Labor and love cover a multitude of needs at the sanctuary, but donations must cover the rest.

Shaffer has received a string of generous donations the last few years that have helped her expand the cat facility, improve dog facilities and run water lines necessary in maintaining the facilities.

But the list of needs for the animals and the sanctuary, from food to medicine to fencing to water hoses, is unending.

With veterinarian bills, food bills and other facility upkeep expenses, Shaffer said the cost to operate the sanctuary totals $40,000 to $50,000 per year.

The cost of care for senior animals can be more expensive because of medicines needed to treat chronic conditions, she said.

For example, one of Shaffer’s dogs with chronic eye issues requires a specially mixed medicine that costs nearly $60 for a three-week supply.

“You never know how much money you’ve got coming in,” Shaffer said. “You make do with what you’ve got.”

Donations, along with corporate sponsorships she hopes to secure, will ensure Shaffer can continue her work and establish the sanctuary as a perpetual haven for animals in need of a home, whether temporary or permanent. 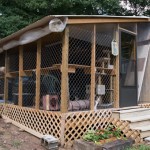 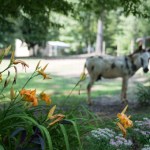 Noah the donkey “thinks he’s a dog,” Sandra Shaffer says, and plays with a plastic blue ball in the yard. Shaffer rescued Noah from drowning about 12 years ago. (Reporter Photo/Keith McCoy) 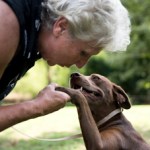 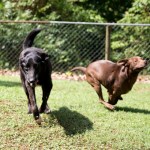 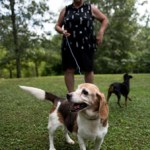 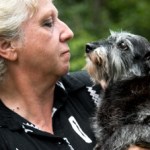 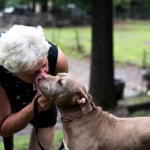 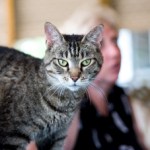 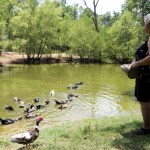 Sandra Shaffer feeds the Muscovy ducks she inherited when she bought the property in rural Blount County for 2nd Chance. 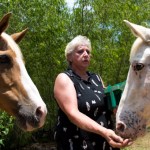 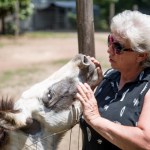