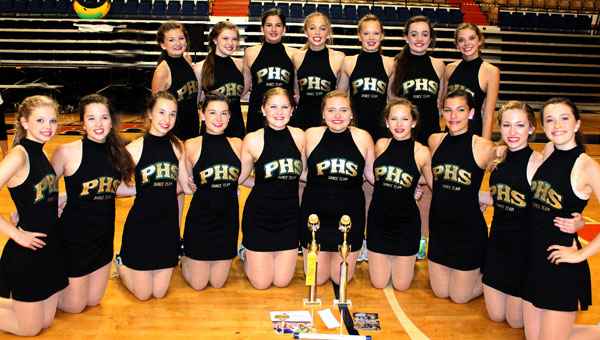 Pelham High School Pantherettes pose for team photos with their trophies to send to their sponsor Katherine Phillips. (CONTRIBUTED.)

“As ready as I’ll ever be,” I answered. Home from media camp at the University of Alabama for only two days, I unpacked and repacked my suitcase to attend Universal Dance Association Camp at Auburn University with the Pelham High School Pantherettes—and we were off!

Dance camp differs from media camp in many key ways. First of all, at media camp, teaching writing is my field of expertise. I began driving girls to dance camp in 2004 when my oldest became a Pantherette; however, I was a rookie at dance camp. When Pantherette sponsor Katherine Phillips received orders from her obstetrician not to travel, another dance parent, kindergarten teacher, and my friend Kelly Whitman and I agreed to stand in for Phillips. Whitman brought the supervisory skills and tools of an elementary school teacher while Phillips sent us with all of the completed paperwork and well-planned details needed. Evidently, Phillips transferred her nesting tendencies to her dancers’ camp experience keeping us ahead of the game at camp.

With Whitman producing markers, paper, and ribbon for every occasion and Phillips covering the details, we appeared amazingly competent. Whitman and I felt like imposters, knowing how little we knew about the art and sport of dance—and how much the team missed their beloved “Mrs. Phil.”

We said, “Point your toes and smile,” often and we relied heavily on the dance captain and co-captains’ digital communication and directives from Phillips who actually seemed to be at camp via phone. Texting me from her doctor’s office and advising us by phone, Phillips was a welcome presence

“I never realized how much Mrs. Phillips did for us behind the scenes before.” said Pantherette Captain Faith Nolen. “Now I know how much she really does.”

My two favorite texts to Phillips were “They won!” and “See!” with a photo attached of her Pantherettes with their trophies. Ultimately, Phillips allowed her team and their leaders to assume responsibility—skills that will certainly come in handy as this devoted sponsor assumes the additional role of mom in August.