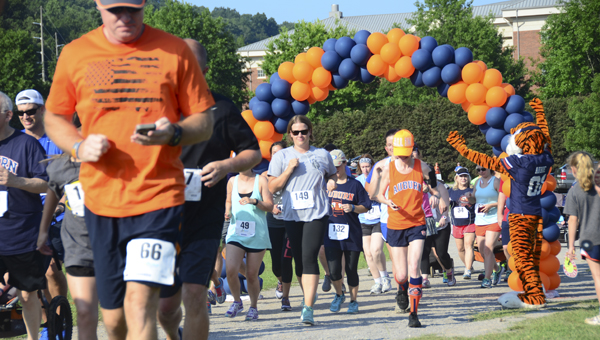 HOOVER – More than 200 people laced up their sneakers and braved temperatures in the 90s June 25 for the Greater Birmingham Auburn Club’s 2016 Aubie 5K and 1-Mile Fun Run in memory of Meredith Maddox at Veterans Park.

The event, in its third year, helps generate funding for the club’s academic scholarship endowments awarded by Auburn University to students from Shelby and Jefferson counties.

The Meredith Leann Maddox Memorial Endowed Scholarship is one of eight endowments.

“She always cared about kids,” said Elon Maddox, Meredith’s father and the immediate past president of the GBAC. “She instilled confidence in kids and wanted to see them do their absolute best.”

Meredith was involved in a car accident in May 2000 that paralyzed her below the arms and left her with no motor or sensory skills.

After completing rehabilitation, she finished her education and became a competitive athlete, participating in several 10K races in her wheelchair. Also, she participated in the Paralympic trials in Atlanta in her racing chair and competed in the javelin and discus events.

Meredith worked as a track and field coach at Hoover High School for 11 years. She died on March 31, 2015.

“Even though she was paralyzed, she felt like everybody should do their best,” Elon said.

Auburn University’s mascot, Aubie, cheered on the runners and posed for pictures throughout the morning.

For more information about the club and its endowed scholarships, visit Thegbac.org.