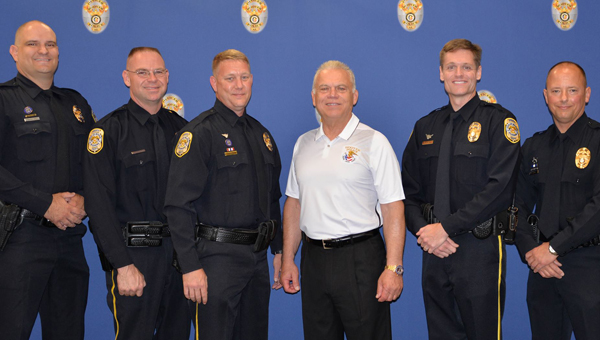 The Hoover Police Department announced the promotions of five members of the department July 1. (Contributed)

HOOVER – Five members of the Hoover Police Department have been promoted.

As of July 1, Lt. Chuck McDonald was promoted to captain and will serve as commander of the Special Operations Bureau.

McDonald started his law enforcement career with the Cobb County Police Department, where he worked for three years before joining the HPD.

McDonald has served in many roles with the department since 1996. He has commanded the Patrol and Investigations divisions.

He has been a member or commander of the SRT unit (SWAT Team) since 1997.

Scott McDonald joined the HPD in 2001 and has served in many different positions, including supervisor in Patrol, Special Investigations Unit, Financial Crimes and SRT.

He started his law enforcement career with the Irondale Police Department before coming to Hoover.

Sgt. Alan Cohen was promoted to lieutenant and will be assigned to the Patrol Division as a watch commander.

Cohen started his career with the Jacksonville State University Police Department and joined the HPD in 2004. His assignments over the years include Patrol, Training Division, Honor Guard, Field Training Officer and Dive Team, and he has instructor certifications.

He served as supervisor in the Patrol and Training divisions.

Officer Lane Thompson was promoted to sergeant assigned to Investigations-SIU/ICE.

Since joining the HPD in 2007, Thompson has served in the Patrol Division and the ICE Unit.

Officer Dustin Swinford was promoted to sergeant and will be assigned to the Training Division.

Swinford started out with the Homewood Police Department and came to Hoover about four years later.

All members of the command staff serve under the leadership of Chief Nick Derzis.