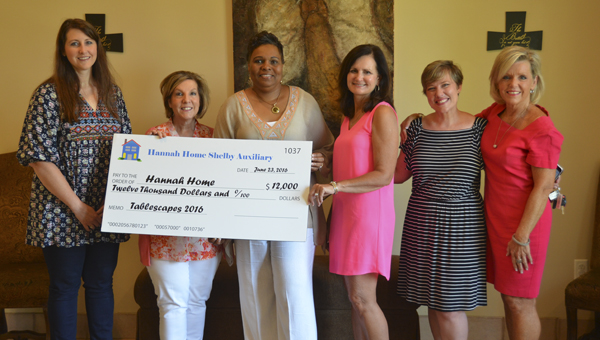 CHELSEA – Fulfilling the financial and spiritual needs of women living at King’s Home Shelby is one of the primary goals of a local auxiliary group year after year.

On June 23, Hannah Home Shelby Auxiliary members presented a $12,000 check to director Gwen Solomon and joined together in prayer outside the home for more than 30 minutes.

The check came from the HHSA Tablescapes 2016, an annual fundraiser the group holds specifically for operational expenses at King’s Home Shelby, a Christ-centered shelter for women and children fleeing domestic abuse and other difficult circumstances.

Solomon said three women have transitioned out of the program in the last three months, and several more women are poised to follow suit in July. 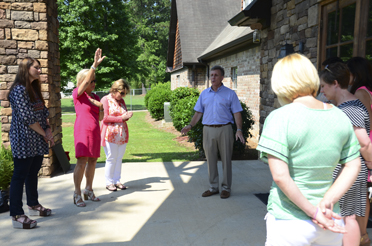 Bill Willis led the prayer with the HHSA members, Solomon and two of the home’s residents.

“Y’all are a huge amount of hope,” Willis said to the women. “What doesn’t challenge us won’t change us.”

“We really focus on that in helping with the natural needs they have and for the spiritual needs,” Scott said. “God knows what you need at the time that you need it.”

Hannah Home Shelby Auxiliary will hold another fundraiser, Painting with a Twist, on July 28 from 7-9 p.m. in The Village of Lee Branch shopping center.

Proceeds will go toward expenses at the home, such as electricity, cleaning supplies, linens and toiletries for residents.