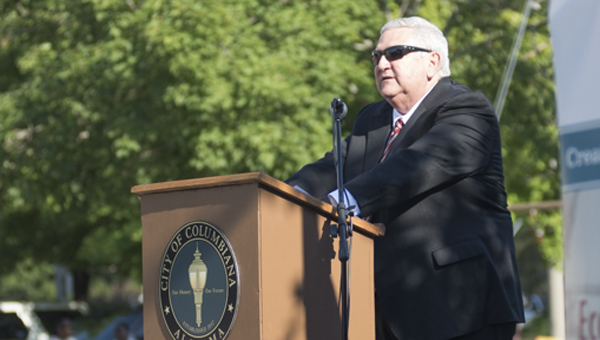 State Rep. Mike Hill of Columbiana has been appointed by Gov. Robert Bentley to serve as the new Superintendent of the State Banking Department. (Reporter Photo/Keith McCoy)

“I want to thank John for his dedication and commitment to the citizens of Alabama,” Bentley wrote in a July 1 press release. “His leadership in the areas of banking regulation and lending has provided stability to the industry and protected consumers while moving the department forward.”

Hill is a current member of the Alabama House of Representatives, serving Shelby County, and was elected in 1986.

“It’s something I’ve been thinking about for a while,” Ellis said in a July 1 phone interview. “The state is facing a lot of serious issues, and I’m excited to throw my name into the hat to help address those issues.”

Hill received his Bachelor of Science from Auburn University, attended the School of Banking of the South at Louisiana State University and Commercial Lending School from the University of Oklahoma.

“For almost 30 years Mike has been instrumental in assisting with banking legislation while serving on several banking committees,” Bentley wrote. “I am confident Mike will do a great job and I am honored to appoint him as the newest Superintendent of the State Banking Department. Mike brings a wealth of knowledge that will continue to move the state forward in the area of consumer protection.”

Hill wrote he is honored and excited to serve Alabama residents in the position.

“Following in the steps of John Harrison, whose tenure was renowned across the country, carries great responsibility,” Hill wrote. “I thank Governor Bentley for this appointment and his confidence that we can build on our strong community banking industry and ensure our banks meet the needs of the bright future for Alabama’s citizens.”