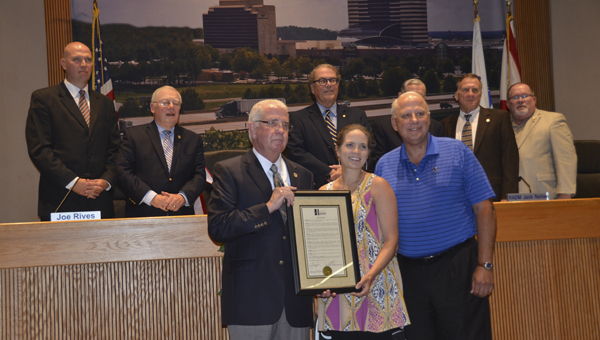 HOOVER – City leaders are recognizing July as Parks and Recreation Month in Hoover.

According to the proclamation, the U.S. House of Representatives has designated July as Parks and Recreation Month, too.

“Our parks and recreation are vitally important to establishing and maintaining the quality of life in our communities, ensuring the health of all citizens, and contributing to the economic and environmental well-being of a community and region,” the proclamation read. “Parks and recreation programs increase a community’s economic prosperity through increased property values, expansion of the local tax base, increased tourism, the attraction and retention of businesses and crime reduction; and … parks and natural recreation areas improve water quality, protect groundwater, prevent flooding, improve the quality of the air we breathe, provide vegetative buffers to development, and produce habitat for wildlife.”

The City Council also took action on properties deemed public nuisances because of weeds and grass.

After a public hearing on property located at 2228 Tal Brook Road, the council approved abatement. The property was declared a public nuisance at a June 6 meeting.

Operations Department Executive Director Allen Pate said the city probably spends less than $100 to clean up on property, and about $3,000 annually on all nuisance properties.

Regarding the new Hoover Sports and Events Center, the council approved two change orders: 1) Dunn Construction’s Package 1A change order proposal to furnish and install 240-foot-by-4-foot-7-inch high Kalwall translucent panels with PE stamped drawings for clerestory opening at the metal building roof; and 2) Rabren General Contractors’ Package 1B pricing for deducting Alternate No. 1 in the amount of $280,000 to delete the Underground Electrical Duct Bank to reroute the primary power underground.

•Declared equipment and vehicles as surplus to be sold at public auction; and police motorcycles to be sold to law enforcement agencies. Police Chief Nick Derzis said the motorcycles likely go to surrounding agencies.

•Approved to amend the municipal code to provide for and regulate mobile food units (food trucks) in city limits. The second reading and consideration for adoption of the ordinance is set for July 18.

At the end of the meeting, the Council President Jack Wright invited those in attendance to join in a moment of silent prayer in honor of Council President Pro Tem Brian Skelton, who died July 2 following a stroke.

A memorial wreath was hung in front of Skelton’s seat.

The Pelham City Council approved an agreement with ALDOT for the preliminary engineering and design work related to the greenway... read more