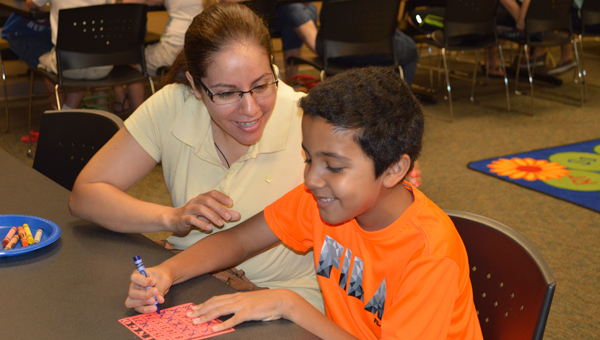 A student celebrates with his mother after winning the first bingo of the day at the Pelham Public Library. (Contributed)

PELHAM— Faces were eager at the Pelham Public Library as each child marked off boxes on their bingo sheets July 5. It might have been the day after Fourth of July weekend, but rather than fireworks these kids were focused on winning prizes.

Bingo day is just one of many events the library has hosted since its kick off to the summer reading program on June 7.

From a reading Olympics program to “Ready, Set, Reptiles!” the library has seen great participation in the “On your mark, get set…Read!” program, according to children’s librarian Rebecca Burchfield.

“It’s been going really well,” Burchfield said. “We’ve had a lot of people come to our programs. We had 170 for the reptiles program…it was a very popular program.”

Each of the students who showed up for bingo July 5 was given a card to play along as junior librarians Eli and Dakota called out numbers. Once a child marked off five in a row—horizontally, vertically or diagonally—they were able to select an item from the prize bin.

There was a whole treasure-trove of items to choose from, such as noisemakers, water squinters, mini beach balls and more.

“It’s been really nice to see,” Burchfield said. “Several of the kids that I see come to more than one thing in a week.”

It took only minutes for the first participant to bingo, and Burchfield said the goal was for every child to have the opportunity to bingo during the event.

The summer reading lists have also been impressive so far, she added. Each of the participants received a “book bingo sheet,” and has been logging the books they read.

Kids will win a small prize each time they earn a bingo. Once they complete a full bingo sheet, they qualify for bigger prizes and a chance to win a bike from Bike Link.

Burchfield said the participation has been so great, they’ve had to restock a few times to keep up with demand.

“We keep having to order more prizes,” she laughed. “It’s a good problem to have.”

The 4H Center will host a birds of prey presentation at 10:30 a.m. July 12 at the library. For more information, visit Pelhamlibrary.com.