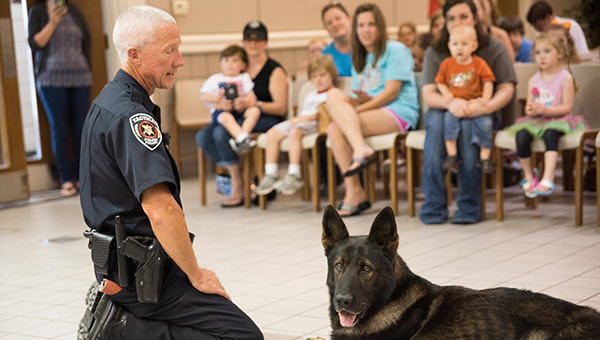 HELENA–A few members who help protect and serve the Helena community were on hand at Helena City Hall on Wednesday, July 6, for the Helena summer reading program.

Children participating in the summer reading program got a surprise visit from the Helena Police Department as officers Philip Richards and Jeff Murphy gave insight to what it’s like to serve in the department.

The program started off with Murphy reading a children’s book titled “Officer Buckle and Gloria.”

A few minutes into the book, laughter erupted in city hall as puppets appeared behind Murphy’s head. Murphy turned to see what the laughter was about but the puppets disappeared.

The next portion of the program was many of the summer reading participants favorite, as Richards brought in the department’s 10-year-old German Sheppard K9 Bak.

“Bak was born in Czechoslovakia and then was trained in Holland,” said Richards. “In some ways he is like your dog at home but Bak has been specially trained to do certain commands. He is a dual purpose dog, meaning he can apprehend or smell to search and find something we’re looking for.”

Richards serves as the department’s handler for Bak, who has been in service for eight years with HPD, and he spent several minutes demonstrating a few commands before finally letting Bak find an object he hid in the room.

Afterwards, Richards gave Bak his favorite toy and children had a chance to take pictures with the K9.

Lastly, Richards and Murphy moved outside to show children a few of the departments Chevrolet Tahoe patrol cars and the different features found on each vehicle.

Many summer reading participants climbed up into the front and back seat of the car to get a glimpse of what the officers see when riding in the cars each day.

Richards also let a few kids see where Bak stays in the police car and how he rides when he needs to go on patrol.

Richards said he enjoys giving the presentations at the summer reading program because “you never know how it’ll affect the kids and how it will influence them.”

The Helena summer reading program will conclude on Wednesday, July 13, with the close out celebration at 2 p.m.

A vehicle matching the description of a missing person’s vehicle was found in an undeveloped section of Shelby County on... read more