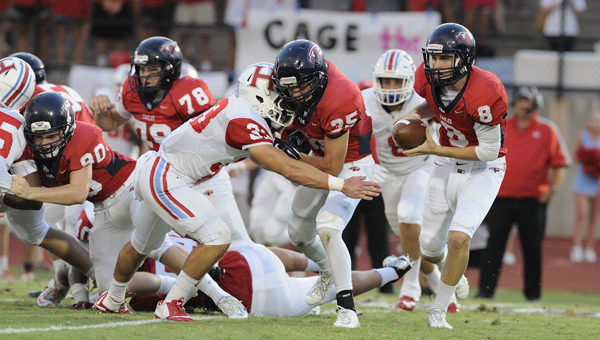 Wyatt Legas will take over the Oak Mountain offense now that Warren Shader has graduated. How Legas handles the Eagles’ quarterbacking duties will go a long way toward dictating the kind of year Oak Mountain has. (File)

So far we’ve looked at Chelsea and Briarwood in the Way-Too-Early prediction tour for the 2016 football season, and now we’re turning the lens to one of the three 7A schools in the county, the Oak Mountain Eagles for part three of 17. Let’s take a look at what the Eagles have going on this year.

This time last year, Oak Mountain was coming off a 10-2 2014 season and was returning a number of key pieces heading into 2015. Unfortunately the Eagles found themselves on the wrong end of a few tight games last season, and lost to four region opponents all by 10 points or less and missed the playoffs entirely, finishing 5-5. Now, as 2014 7A Coach of the Year Cris Bell heads into his fifth season at the head of the Oak Mountain program, there are a few challenges that his Eagles will need to overcome if they want to return to the postseason.

First, Oak Mountain has to replace five starters on the offensive side of the ball, including one of the best option quarterbacks in the state in Warren Shader, and also has to replace a whopping eight players on the defensive side of the ball as well, including the majority of a talented secondary. The Eagles have to do this all while competing in what is largely considered the toughest region in the state, 7A Region 3, along with teams such as Hoover, Spain Park and Vestavia Hills as well as upstart Thompson and newcomer Huffman. That is, to put it lightly, not the most ideal scenario.

Not ideal maybe, but its where Oak Mountain is. While there will be a number of fresh faces occupying key roles this year, Bell and the coaching staff are confident they will all produce.

Under center in Bell’s option-based offense this year will be Wyatt Legas, a rising senior. Legas has been in the Oak Mountain system since his freshman year, and started two games for Oak Mountain in 2015 when Shader was out. In one of those starts, Legas led the Eagles to a tight, 21-14 win over Mountain Brook, which at the time kept the Eagles’ playoff chances alive, albeit by the slimmest of margins. Bell has repeatedly referred to Shader as the best option quarterback he has ever coached, and replacing him will obviously not be easy, but Legas will step in and make the offense his own. This is his fourth year in the program, and he understands what is needed at the quarterback position as well as anyone, now he just needs to step in and execute.

Alongside Legas in the backfield will be returning running back Daniel Salchert. Last season Salchert split carries evenly with Coleman Reeves, who has since graduated, and still racked up 879 yards of offense as a junior. A lightning-quick back who can get to top speed in a hurry, and a serviceable pass catcher as well, Salchert will bring much-needed in-game experience to the backfield. Oak Mountain uses a two-back set, and Jaylin Gaines and Connor Wilson will fill the other running back position in tandem.

While the backfield is crucial in the Oak Mountain offense, potentially the most versatile and explosive unit on this team is its receiving corps. In a word, the Oak Mountain receivers are rangy. Noah Egan and Nathan Jones, the Eagles’ two main outside targets, are both over 6-feet-4-inches tall, and junior Ethan Duncan is also roughly 6-feet-2-inches. Those three, along with 6-foot tight end Carson Bobo and inside receiver Garrett DeAraujo will give Legas a plethora of big targets to hit.

Oak Mountain will also benefit from the return of nearly the entire offensive line. Justice Hammond is gone, and replacing a center of his caliber is never easy, but the other four starting linemen are back, marking the first time Bell has had four returning starters on the offensive line. Jacob Feenker will slide over to take Hammond’s vacated center position while his brother Nick and newcomer Eli Lombardo will be at the guard spots. William Roberson and Ben Wilke are both back at the tackles. Hopefully, the consistency and experience on the line will make Legas’ life easier.

In stark contrast to the offensive line, the Eagles are replacing virtually the entire defensive unit, giving defensive coordinator Rusty Frisch almost a blank slate to work with. Gone are names like Armond Lloyd, Payton Youngblood, Josh Jones, Hall Morton, Mitchell Jones and Avery Holsombeck, and in their places are a number of new faces. The defensive line is an undersized unit this year, and will use between seven and 10 players in any given game, depending on the situation. Trey Meadows, Matt Pflaum, Whitt Jackson and Daniel Perkins will most likely start in the trenches of Oak Mountain’s 4-3 defense, while Jordan Davis, Jake Tice and Connor Templin will rotate in often.

Spencer Hughes and Mingyu Lee both saw time last year at the linebacker position, and will lead that unit this year, while Thomas Pechman and Connor Webb will return to lead the secondary, while a herd of new faces like Max McLaughlin, Zay Brown, Justin Evans, Brett Cruce, Zach Nelson, Jackson Sauers, Davis Manning, Hunter Martinez and Jackson Murphy will fill in around them.

Last season Oak Mountain scored 213 points and gave up 213 points en route to their .500 finish. For a different result this season, Oak Mountain will need more luck than it had last year, and will need to get solid production from these new faces.

Way-Too-Early prediction: Last season, for the two of you who might remember, we predicted Oak Mountain to be one of the last teams left standing in the county, which did not pan out. This year, with so many holes to fill, especially on the defensive side, it is tough to look into the crystal ball and envision this team returning to the postseason. I’d like nothing more than to be wrong, but Oak Mountain finishes the year with a 4-6 record and misses the playoffs for the second consecutive year.