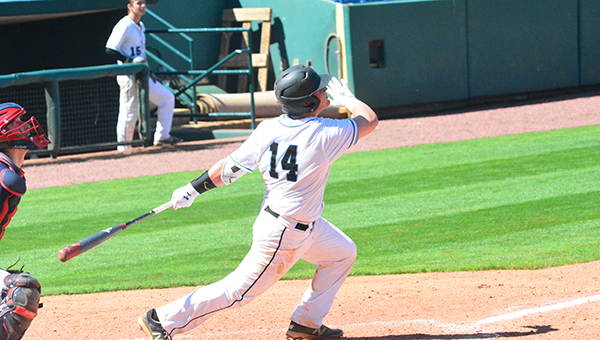 Helena Huskies catcher Sam Praytor has been selected to play in the Under Armour All-America baseball game on July 23 at the Chicago Cubs Wrigley Field. (File)

CHICAGO–Upcoming Helena High School senior Sam Praytor and current catcher for the Helena Huskies baseball team will have the opportunity to play in a nationally televised game at the Chicago Cubs iconic Wrigley Field on July 23.

Under Armour, along with Baseball Factory, has released a roster that includes some of the top high school baseball talent from across the country to compete in the ninth annual Under Armour All-America baseball game.

Praytor had a stellar junior season for the Huskies in 2016 batting .454 that included 54 hits, 44 RBIs and a county-leading 13 home runs. Praytor had an on-base percentage of .631 as well as a slugging percentage of .908. Praytor was also walked 49 times. His stellar stats at the plate helped earn him Shelby County Baseball Co-Player of the Year and a spot in the Under Armour All-America game.

Before learning that he earned a spot in the game, Praytor explained how he was selected and what would be in store when he travels to Chicago.

“My hitting coach Wes Helms will be a coach at the game and I always watched the game growing up since I was 10 or 11-years-old and I thought it was awesome and that it’d be an honor to play in it,” said Praytor. “Helms said if I had a solid junior season I’d have a good shot at playing in it. I ended up having a good junior season and it got me the tryout, which was June 30. I went to Peach Tree City, Ga. for the tryout and I guess they liked me. I’m really excited for the game and Wes told me it will be one of the greatest experiences in my baseball career up to this point.”

Praytor, a current baseball commit for the University of Alabama, is excited and humbled to step onto a field where “so many legends and MLB players have played,” Praytor said referring to Wrigley Field.

Praytor and other Under Armour All-Americans will spend four days in Chicago that will include participating in a formal workout in front of MLB scouts, partake in a home run derby, work with top coaching staff that includes Helms, Bill Ripken, Tim Hudson and Eric Milton, as well as playing in the actual game.

When asked how has playing for Helena prepared him for this point in his baseball career, Praytor praised the Huskies coaching staff.

“One thing I’ve learned playing for them is they push me to go out everyday and not hold anything back and bringing energy every single day and working hard no matter what,” said Praytor. “It has helped me not only on the field but also off the field.”

Praytor will enter his senior season with the goal of winning a state championship but up to this point, Praytor had numerous people and coaches to thank for his success thus far.

“I definitely want to thank Wes Helms and my coaches at Helena and Baseball Factory and to thank God for giving me the ability to play,” said Praytor. “I want to thank my parents for spending endless amount of money going out of town and taking me around to games and spending endless amount of hours just so I can play the game I love. Also, my summer ball coach Jamie Crane I’d like to thank him and all the opportunities and unlimited exposure he’s helped me get in making me a better baseball player.”

The Under Armour All-American game will be broadcast live on Saturday, July 23 at 3 p.m. on the MLB Network.

For more information on the game and players, visit Baseballfactory.com/ua-baseball/all-america-game/.