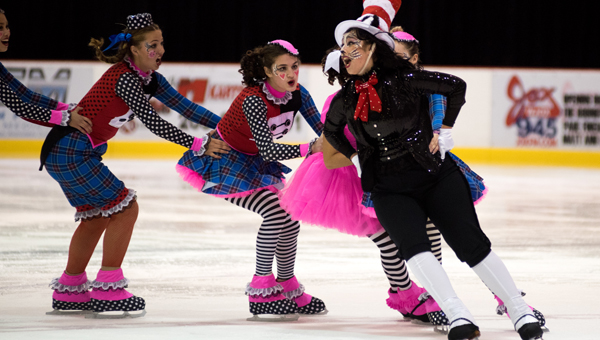 Competitors utilized props, costumes and scenery to illustrate a story on ice at the ninth annual National Theatre on Ice Competition in Pelham. (Reporter photo/Keith McCoy)

PELHAM— The ice might have been cold, but the competition was hot June 30-July 3 as colorfully costumed skaters anxiously awaited their turn to perform at the National Theatre on Ice Competition.

Every competitor had a character to portray as their teammates illustrated a story through complex twirls, jumps and spirals in teams of eight to 30 people. Over the course of one weekend, about 1,260 skaters comprising 71 skating teams took the ice.

“Theatre on ice is getting more and more popular,” said Craig Henderson, director of skate at the Pelham Civic Complex and Ice Arena. “It combines the grace of ice skating with the excitement of theatre and dance.”

This was the ninth annual national competition, and Henderson said it was the first time the event was held in the south. Competitors came from all over the country to compete for national recognition.

Pelham’s Birmingham Figure Skating Club hosted two teams and both were ranked in the top 10 for the open and preliminary categories of competition.

In the preliminary finals, the Magic City Theatre on Ice team placed seventh. The first place team, Center Stage of Boston, was from from Massachusetts.

“The level of entertainment that was there, it was just phenomenal,” City Council member Beth McMillan said of the event during a July 5 meeting. “I do have a new appreciation and really enjoyed it.”

The medals were awarded based on music and sound, choreography and skating movements and performance, as well as the groups ability to tell a story utilizing costuming, props and scenery.

Stories ranged from original pieces based on characters, such as Maleficent, to adaptations of “Mulan,” “The Cat in the Hat,” “The Lion King” and more.

From the ice arena’s facilities to the estimated economic impact of about $5 million, the National Theatre on Ice Competition generated positive feedback for Pelham, according to city leaders.

“I spoke to seven different people in the program, and they were extremely complimentary and saying, ‘We want to come back here. Please bid on all future events,’” City Council President Rick Hayes said. “(It was) a fantastic event all the way around.”

Next year’s competition will be held in Evansville, Ind., and Henderson said Pelham plans on sending teams to compete.