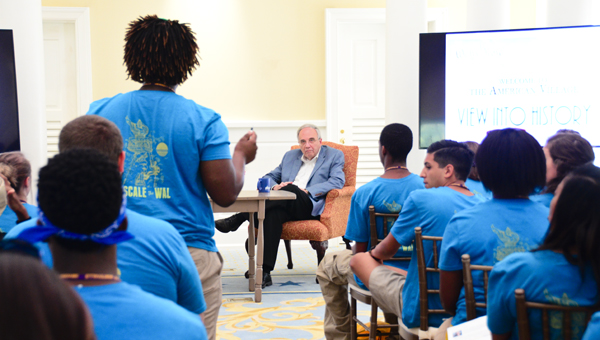 A student asks American Village founder and CEO Tom Walker a question during the “View Into History” show June 24 as part of the 2016 Walsh Academy of Leadership. (Reporter Photo/Emily Sparacino)

MONTEVALLO – Nearly 40 Alabama high school students explored the roots of American heritage and democracy as they participated in a three-day leadership program in Shelby County.

Along with 15 college counselors, the students spent June 23-25 participating in team-building exercises and listening to various speakers in the Youth Leadership Development Program’s fifth Walsh Academy of Leadership.

“We’ve had a great time so far,” said YLDP Program Director Libby Holmes with Community Outreach at Jefferson State Community College Shelby-Hoover campus, as students and counselors filed into the Rotunda at the American Village for a “View Into History” show.

Dr. Treva Medbery, Officer for Educational Initiatives at the American Village, led a discussion with American Village founder and CEO Tom Walker about the formation of the venue and the importance of students’ civic involvement.

Walker, whose vision culminated in the opening of the American Village 17 years ago, said students should focus on being “connected, empowered and committed.”

“We’re trying to cultivate a lifelong commitment to be engaged and involved,” Walker said. “American democracy is not a 100-yard dash; it’s a marathon.”

Walker also stressed the importance of voting at every opportunity.

“Your vote, it has impacts,” he said. “One person makes a difference. The fact is you are leaders now. People look to you now. You can help drive the conversation.”

When asked how he developed such a great love for history, Walker said his grandfathers “loved to talk about politics” and influenced him growing up.

“Americans define themselves not by where they came from but by what they believe in,” Walker said. “We’re given life and liberty by our Creator.”

His drive to form the American Village came from a desire to give young people “practice time at the civic wheel.”

“We try to land students that come right in the middle of a scene in American history,” Walker said. “Some said it was a crazy idea and wouldn’t work, but I decided to give it my best shot. I learned perseverance.”

Lesli Johnson, an American Village interpreter, discussed her responsibilities as an interpreter and the role African Americans played in America’s journey to independence.

Johnson has portrayed Harriet Tubman, an escaped slave who led other slaves to freedom via the Underground Railroad, and Phyllis Wheatley, a slave and well-known poet in pre-19th century America.

“What I like about this place is we are not just giving you facts and figures about history,” Johnson said. “We are telling the story. We want you to learn something or experience something you haven’t before.”

Walker praised Johnson and the other interpreters for their work, and said they expertly field questions from audience members about their characters every day.

“That is a rare gift, and she (Johnson) gives it daily,” Walker said. “I have seen people shed tears watching Lesli.”

After the “View Into History,” the group visited the Colonial Courthouse, at lunch in Liberty Hall, toured the National Veterans Shrine, visited the replica of the White House Oval Office and attended the Interpreter Workshop at Liberty Hall.

Dr. Kevin Walsh inspired the founders of the WAL to develop the program in his honor to provide a more in-depth experience in developing as students, leaders and citizens.

Walsh started Alabama’s YLDP in 2008 as he worked with the Boy Scouts of America.

The YLDP grew to serve more than 500 students representing 86 high schools across the state each year, and has awarded millions of dollars in college scholarships to its graduates.