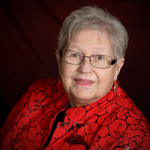 Karen J. Johnston entered Heaven’s realm Monday, July 4. She was born Feb. 22, 1940, in Wichita, Kan. She was married to Leon Johnston at Haysville Methodist Church on May 31, 1958. Karen was a longtime resident of Birmingham, having moved with her family from Clearwater, Kan., in January 1977.

Karen was preceded in death by her parents, Erroll and Billie Hungerford, and her sisters, Susan Mason and Pamela Zafuta. In addition to her husband, Leon, she is survived by her daughter, Gina Johnston-Ponder and partner Greg Ponder; grandson, Caleb Ponder; son, Jason and partner Mark Davis; brother, Charles Hungerford and wife Barbara; sister-and brother-in-law, Jeanne and Charles (Oats) McCoy; nieces, nephews and a host of friends in Alabama, Kansas and across the country.

Once in Birmingham she became affiliated with the Newcomers Club and Beta Sigma Phi. Karen was a member of Christ Church United Methodist in suburban Birmingham and Cahaba Valley Elks Lodge in Pelham, where she served as Historian and a dedicated volunteer. Over the years, Karen worked as a telephone operator at Southwestern Bell in Wichita (where she became known as one of “Ma Bell’s ding-a-lings”), a nursing home attendant in Clearwater, and a tax remittance clerk at Central Bank in Birmingham.

Karen was a feisty competitor who played industrial league softball, tennis, bridge, bunko and dominoes. She was an avid reader who enjoyed being a member of a local book club. Most importantly, she was a loving mother, Christian homemaker, and girlfriend of 61 years and bride of Leon for 58 years.

The family will receive friends from 10-11 a.m. on Saturday, July 16 in the Narthex of Christ Church United Methodist, located at 5091 Caldwell Mill Road, Birmingham, AL 35242. A memorial service will be held at 11 a.m. following the visitation. Friends are invited to lunch and fellowship in the Gathering Place at the church following the service. An Elks memorial service ritual will be held at 2 p.m. on Sunday, July 17 at the Cahaba Valley Elks Lodge, located at 1738 Morgan Park Road, Pelham AL 35124. All are invited to attend.

In lieu of flowers, memorial gifts may be addressed to the E.L.I. Mission Project at Christ Church United Methodist or to Cahaba Valley Elks Charities.

Pelham Police Chief Larry Palmer thanks residents for support and promises to maintain professionalism throughout the department in a July... read more