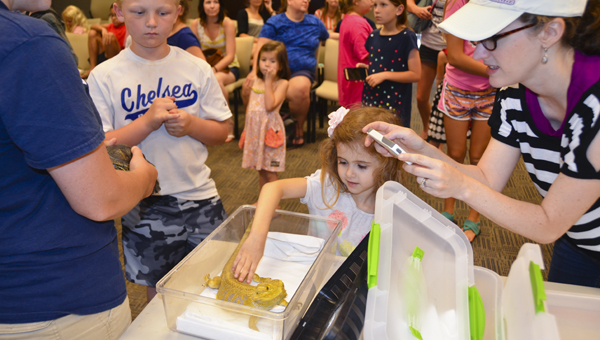 A screech owl, desert lizard, turtle and corn snake were on display, as environmental educators Katelyn Diercks and Phillip Higgins talked about each of their attributes.

“We call them our ‘co-workers,'” Diercks said of the critters, which call the Alabama 4-H Center home for various reasons.

Mr. Aldo, the screech owl, was the victim of a car strike and has neurological damage, making him a non-releasable bird.

He is between 5 and 8 years old and weighs 3 to 4 ounces, roughly the weight of an iPhone.

Owls, eagles, falcons, osprey, hawks and kites are the six birds of prey that live in Alabama.

Higgins, a herpetologist, showed the desert lizard, a reptile that eats meat and plants, can change body temperature and has spikes on his back for natural protection.

He also showed an aquatic turtle called a chicken turtle, which is closely related to a yellow belly slider and can be found in Alabama.

One in three turtles are critically endangered because people like to eat them, Higgins said, and road mortality is one of the most common ways turtles are killed.

As he pulled out the corn snake, Higgins asked who in the room was scared of snakes.

“Only 15 percent of snake bites in the U.S. are accidental,” he said. “Most snakes want nothing to do with us.”

Of 50 species of snakes in the U.S., only six are poisonous, he said.

As a non-poisonous snake, the corn snake eats rodents and is marked with a pattern on its belly resembling Indian corn, hence its name.

Higgins said one way to distinguish a non-poisonous snake from a poisonous snake is to look at the eyes. Poisonous snakes such as copperheads, rattlesnakes and cottonmouths have slits for eyes because they are nocturnal.

After the presentation, Higgins and Diercks allowed children to touch each of the creatures.