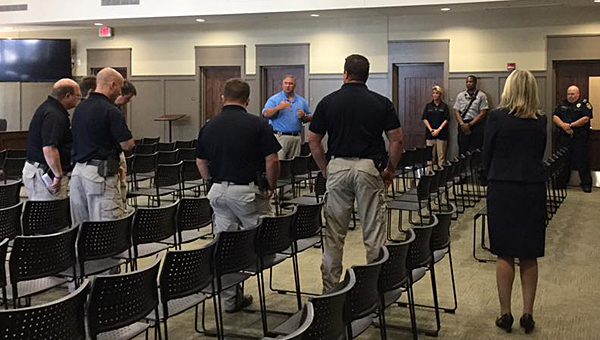 Alabaster law enforcement officers join city leaders in a moment of prayer for the Dallas Police Department at noon at Alabaster City Hall on July 8. (Contributed)

Local law enforcement officials have expressed condolences for the family members and fellow officers of the victims of a July 7 shooting in Dallas, and are encouraging local officers to stay true to their “core values, principles and sense of right and wrong.”

On July 7, five Dallas police officers were killed and another seven were injured when a gunman opened fire on them at an event protesting police shootings in Louisiana and Minnesota.

Shortly after learning of the shooting, several law enforcement agencies in Shelby County were quick to offer support and condolences to their Dallas colleagues.

Multiple local police departments and the Shelby County Sheriff’s Office reported many members of the public had dropped off food on July 8 to show support for their officers and deputies. Several local departments joined departments across the nation in a moment of prayer at noon.

Earlier in the day, Shelby County Sheriff John Samaniego issued a statement to his deputies expressing his support for them.

“I want to take this time to tell each and every one of you that I am honored we work together and I am proud of the job you do. I also want to ask each and every one of you to be ever mindful of your surroundings and circumstances so that you may stay safe and return home at the end of every tour of duty,” Samaniego wrote. “I ask each of you to guard your core values, principles and sense of right and wrong and avoid being influenced by the actions of others. The events of the world will never change my sense of fairness when dealing with others. I pray it is the same for all of us.”

“Our agency will always remain professional and vigilant in safeguarding your well-being. As a sworn police officer, I took this job to make a difference in my community and every man and woman in my department has done the same,” Palmer wrote. “I have encouraged my officers to always be aware of their surroundings, watch each other’s back, and always make a positive difference. But I also urge them to spend quality time with their family and loved ones.”

“Today I have been blown away by the number of people in our community who have called, emailed, texted and who have come by the office bearing gifts of food or just a ‘wanted you all to know you are on my mind,’” wrote Helena Police Chief Pete Folmar. “The Helena Police Department grieves for those lost, but I have never been more proud of this profession or of the men and women who wake up and pin a badge on their uniform and climb in a marked car every day to keep us all safe, and I have never been prouder of my city.”