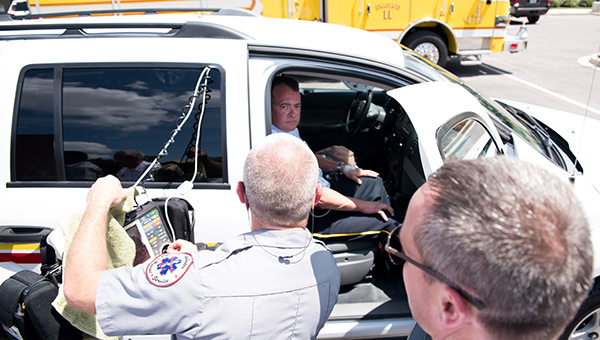 Members of the Alabaster Fire Department hook up monitors to Alabaster Fire Marshal Chief Chip Brantley prior to him sitting in a parked car in extreme heat on Friday, July 8. (Reporter Photo/Keith McCoy)

ALABASTER–Members of the Alabaster Fire Department, doctors, city officials and more gathered in the parking lot at Alabaster City Hall to conduct a simple, but powerful experiment of how sitting in a parked hot affects the body during extreme temperatures.

The Alabaster Fire Department used a white Dodge Durango and Alabaster Fire Marshal Chief Chip Brantley volunteered to sit in the Durango for a duration of 30 minutes during peek summertime heat on Friday, July 8 at 2 p.m.

“The purpose of today’s event is to raise awareness of the extreme temperatures inside of a vehicle,” said Alabaster Fire Chief Jim Golden. “In an effort to clearly demonstrate this, Chief Brantley has volunteered to sit in an Alabaster Fire Department vehicle that is not running with all of the windows rolled up. With the guidance of Dr. Snyder, we have established maximum vital sign limits and if any of Chief Brantley’s vital signs reach these limits we will immediately stop the demonstration.”

Brantley was hooked up to several monitors to record his core body temperature, blood pressure and heart rate while sitting in the non-running car. Every five minute increment, members of the fire department recorded Brantley’s vital signs as well as the inside temperature of the vehicle.

Before Brantley was placed in the vehicle, his body temperature was 99 degrees, blood pressure was 133/99 and his heart rate was 129 beats per minute.

After turning off the air conditioning in the vehicle, the starting inside temperature of the Durango was 82 degrees.

“Studies show that on average 37 kids die each year being left inside a parked vehicle,” said Golden. “While we don’t always know or understand why these events happen, we must do everything that we can to ensure these events are not repeated in our community.”

One of the most staggering results of the experiment came at the 10-minute mark.

After just 10 minutes of the car being turned off, the inside temperature of the car had soared to 114 degrees, an increase of 32 degrees and Brantley’s body temperature was now 100.5 degrees.

Every few minutes, Brantley would comment on how he was feeling saying, “I feel a lot more humidity and it feels like it’s harder to breathe.”

As the minutes ticked away and temperatures soared, the vital signs of the 37-year-old healthy adult male declined and at the 25-minute mark the experiment came to a halt when Brantley’s body temperature reached the 102-degree mark and the inside temperature of the vehicle read 123 degrees.

After taking a few minutes to recover, Brantley took questions and said he can’t imagine what a child would be feeling if they had been placed in his situation.

“It got hot pretty quick, and it started to rise the longer I was in there and it became harder to breathe and it felt like the air was heavy,” said Brantley. “I was sweating profusely and the leads for the monitor were falling off and the thermometers started to go bad and it was very hot. I can only imagine what a child would feel inside of that car. It has to be devastating.”

Brantley explained one tip parents can do to ensure a child is not left in the back seat of a hot car is to place your shoe in the backseat. When the driver gets out they will remember to retrieve the shoe and the child.

Golden reinforced that calling 911 is still the best option if someone encounters a child left unattended in a hot, parked vehicle.

“What we want to emphasize is if you encounter a child in a parked car unattended, the first and most important thing you can do is call 911 immediately,” said Golden. “That starts the response of the emergency responders, please call 911 before you attempt to try to locate the parent, before you post it on social media or before you take a picture of it.”