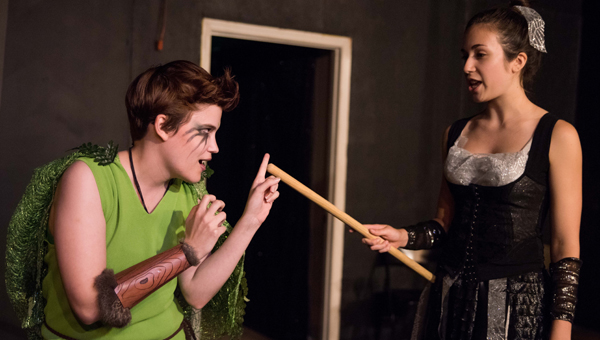 Puck, played by Amy Strickland, and Cobweb, played by Ashley Pope, discuss recent the newcomers to the fairy woods during a rehearsal for South City Theatre’s “A Midsummer Night’s Dream.” (Reporter photo/Keith McCoy)

PELHAM— Most people have heard of the classic fairy-filled show, ‘A Midsummer Night’s Dream.’ The classic Shakespearian show is a crowd favorite, but audiences have never seen it quite like this before.

South City Theatre’s version is presenting its own twist on the show, which will run from July 29-Aug. 6.

The show is set in the ‘70s at Club Shroom, where Theseus has completed his corporate take-over of Hippolyta’s company, claiming her as his bride, Hermia and Lysander have run away to the fairy woods and mystical creatures play games both the actors and the audience.

“I was listening to music and I was like, ‘This could work. This could be fun,’” director Lisa Ponder said of her adaptation. “I thought about it for a while, how it could work and what would have to be changed. I started planning it about a year ago.”

While the text remains the same, Ponder and her co-director, Donna Williamson, have revamped some of the mechanicals. Instead of weavers or fabric makers, this version has fashion and home décor designers.

Hippolyta herself, who is played by Williamson, has been transformed from an Amazonian warrior to a big corporate magnet.

From the moment attendees arrive, they’ll be transported back to the disco era in “Pelham’s last standing disco club.”

A bouncer at the door will determine who may enter, and hands will be stamped at the door before guests are allowed to roam the lobby and stage area. Ponder said everyone is invited to dance on stage prior to last call and the start of the show.

“I think (guests) are going to see a lot of fun,” Ponder said. “For some of them, it’s going to be memories with the discos. We are taking the interactions through to the end of the show, and kind of adding a Rocky Horror twist. So we’ve got some things planned.”

The most important thing to Ponder, though, is properly conveying the story of “A Midsummer Night’s Dream” to the audience. She said she and Williamson have been going through each line with the cast to determine its present-day meaning.

Ponder said she’s been focusing on breaking out of the Shakespearian rhythms everyone is taught in high school when they first learn his plays. She’s put a lot of emphasis on more natural sounding rhythms.

Tickets are $16 general admission and $13 for student and seniors. Tickets are available online at Southcitytheatre.com.