All jazzed up: Jazz in the Park rocks Helena Amphitheater 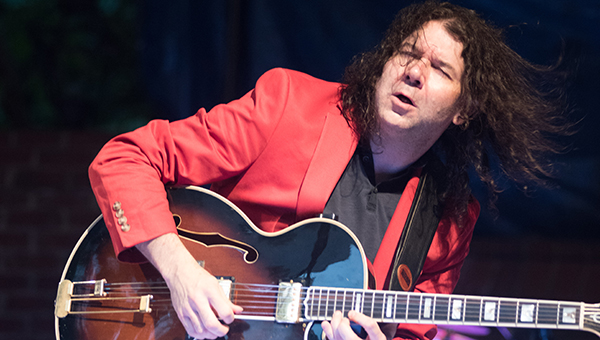 Jazz guitarist Dirk K was one of the musicians who took the stage at the Helena Amphitheater on Sunday, July 10 for Jazz in the Park presented by Magic City Smooth Jazz. (Reporter Photo/Keith McCoy)

Magic City Smooth Jazz and the Jazz in the Park program returned to the Helena Amphitheater on July 10, as the program entered its seventh year providing free jazz concerts at venues throughout the Birmingham area.

The free concert gave Helena residents and families a chance to hear a few hours of great jazz music while relaxing near the banks of Buck Creek.

Accomplished guitarist Dirk K and The Rubber Band Effect jazz band both rocked the stage and provided some easy listening for all as many relaxed in tailgate chairs and enjoyed food and beverages in the park.

Helena Mayor Mark Hall said he believes Magic City Smooth Jazz and the Jazz in the Park program is a great partnership for the city.

“Despite some stormy weather, Jazz in the Park was a success again this year,” said Hall. “Although the crowd was diminished a little by the rain, we still had a great turnout. It’s great to be able to partner with the Jazz in the Park organization. They bring some of the best jazz musicians in the country to Helena each year and this year’s headliner, jazz guitarist Dirk K, was outstanding. We look forward to next year’s event.”

Jazz in the Park began in 2008 and since its inception has hosted more than 75 free concerts to the public while presenting more than 275 emerging and established artists while impacting the lives of more than 20,000 adults and children.

Magic City Smooth Jazz is a non-profit corporation whose mission is to expose and engage audiences in underserved communities to various styles of jazz music.

For more information on Magic City Smooth and to view a full schedule for Jazz in the Park events, visit Magiccitysmoothjazz.com.