Because of federal charge, local charges dropped for theft suspect

ALABASTER – Several Shelby County District Court charges have been dropped against an Alabaster woman charged with stealing more than $300,000 from her Alabaster employer, as she has been indicted on a federal bank fraud charge. 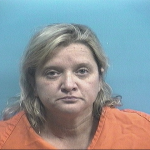 On July 8, Judge Daniel Crowson dismissed without prejudice three felony charges of second-degree possession of a forged instrument and one felony count of first-degree theft of property against Rebecca Ann Norton.

When a charge is dismissed without prejudice, the suspect could possibly face the charge again in the future.

Crowson dismissed the charges because Norton was indicted by a federal grand jury on a bank fraud charge on June 29, according to court documents.

The Alabaster Police Department arrested Rebecca Ann Norton on Aug. 14, 2015, and charged her with one felony count of first-degree theft of property and three felony counts of second-degree possession of a forged instrument.

According to her arrest warrants, Norton allegedly stole hundreds of thousands of dollars from an Alabaster-based company between August 2013 and August 2015.

Since her arrest, Norton has remained in the Shelby County Jail on bonds totaling $500,000.

On June 21, Norton was transferred to the custody of U.S. Marshals and U.S. Postal Inspectors to face a federal bank fraud charge brought against her on June 20.

According to the criminal complaint filed against Norton in U.S. District Court by a postal inspector on June 20, Norton allegedly forged a check from her employer on May 20 and made it payable to herself.

The $1,000 check was drawn on the company’s account with Wells Fargo, and Norton allegedly forged the signature of one of the company’s corporate officers on the document.

According to federal law, those found guilty of bank fraud face a maximum fine of $1 million and up to 30 years in prison.

All jazzed up: Jazz in the Park rocks Helena…