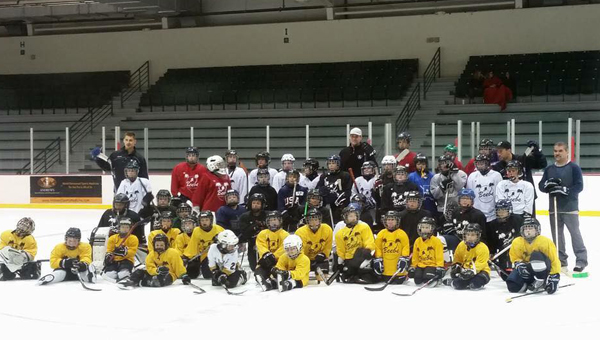 Students will learn all aspects of the game, training on the ice, on dry land and in the classroom, Bodie said. Boys and girls ages 8 to 16 are welcome to attend the two-day instructional camp.

“I think a big part of being a former professional is it feels like a duty that you need to pass on your trade,” Bodie said. “Alabama is not a very big hockey state, usually. It’s special for us to come to a place that doesn’t really have hockey and bring them professional training.”

The camp will last from 9 a.m. to 3 p.m. each day. Bodie said the students will spend two hours on the ice each day, about an hour training on dry land, some time in the classroom and some time practicing off-ice stick handling.

He said they welcome all skill levels; however, students should have some basic ability to skate on the ice. Students will learn the basics of all aspects of the game, according to Bodie.

On ice, Bodie said they focus on the basics of skating, such as forward and backward skating, turns, quick starts and more. The students will also practice puck-work, such as passing and shooting.

As important as the instructional work is, Bodie said it is just as important for the kids to have fun. They make it a priority to keep the training light and fun through games and activities.

“They take it really well,” he said. “A lot of kids that come out are eager to learn.  It’s a lot of fun hanging out with the kids and they truly enjoy it.”

Bodie grew up playing junior hockey in Canada before he went pro, being drafted by the by the Edmonton Oilers in the 2003 NHL Entry Draft. He last played for the Toronto Maple Leafs, but also played with the Anaheim Ducks and Carolina Hurricanes.

Beebe played junior hockey in the United States before playing for Western Michigan University. Professionally, he played in the Southern Professional Hockey League, the ECHL Hockey League and the Oberliga in Germany.

With so many years of experience, Bodie said he most enjoys sharing stories with the kids and helping them pursue future aspirations in hockey. He said many of the students he teaches have goals to make it to the professional level.

“I enjoy telling stories,” he said. “A lot of kids have a lot of questions, and it’s about teaching the kids of how I got to where I was and what it takes as well.”

Registration is $200 for both skaters and goalies. Lunch will be provided for campers both days. Students should bring a full set of hockey gear, athletic shoes and clothing and a water bottle.

For more information or to register, visit Beebehockeycamp.com.