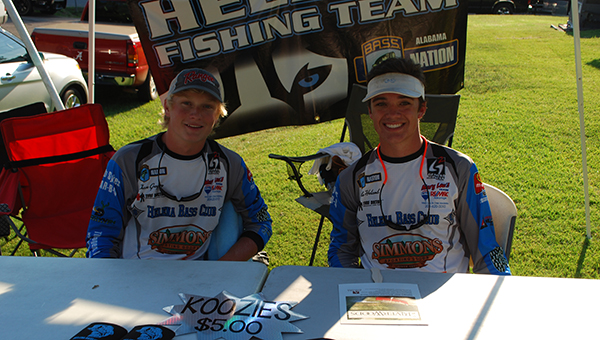 The two bass anglers, who have been good friends since intermediate school, qualified for the Costa Bassmaster High School National Championship after finishing seventh in the Alabama B.A.S.S. Nation High School Regional Year to Date standings that were collected from Dec. 5, 2015–June 11.

The top ten finish was awarded to Gregory and Holcomb after solid finishes in previous tournaments that resulted in 50 pounds of fish and 979 points in the standings.

Gregory and Holcomb will join other high school anglers Aug. 2-6 in Paris, Tenn. where the two will compete on Kentucky Lake for the national championship.

Gregory said he got his start in fishing when he was a little kid.

“My dad has been fishing since he was a kid and I grew up fishing the Coosa River and it progressed into fishing tournaments,” said Gregory. “Every since I was old enough to get in the boat I’ve been fishing.”

Gregory said neither him nor Holcomb have fished Kentucky Lake before but they will leave July 31 to head to Paris, Tenn. and will spend a few days practicing and fishing the lake before competing.

Gregory was thankful for the sponsorships and donations that will help ease the cost of lodging and food for the week, gas for the boat and truck and more.

“Everybody does it to catch big fish but I just like being out there,” Gregory said about bass fishing.

The Helena bass fishing team has approximately 16 members and normally meets before an upcoming tournament.

For more information on the team, visit Facebook.com/helenafishingteam.

Helena Huskies catcher Sam Praytor has been selected to play in the Under Armour All-America baseball game on July 23... read more