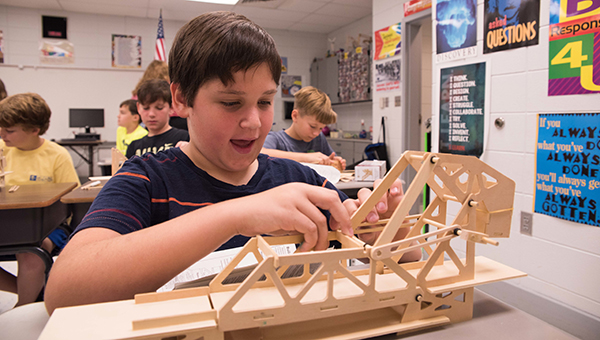 Students from Shelby County Schools are attending a four-day summer enrichment camp called Camp Build, which lets students put their creative skills to the test to build a number of different bridges and compete in Lego challenges.

Each day of the camp, students will build a different bridge that they will get to take home and on July 12, students built a Strauss Bascule bridge by putting each wooden piece together using instructions.

Upcoming HIS fifth grader John Robert said his favorite subject in school is science and his favorite thing about the camp has been building the bridges because “I like that we get to play with them and take them home.”

Between completing the bridges, students would reach their hands into a cup and pull out various slips of paper that had numerous Lego challenges to complete.

Some included building a garden, building something as big as your hand, build a beach umbrella, build something tall and more.

For those interested in the summer specialty enrichment camps, multiple camps are offered throughout the summer at various schools throughout Shelby County. Fees will vary depending on the classes that are offered.

For more information and to view a full list of dates and times summer camps are offered, visit Shelbyed.k12.al.us/community/enrich.html.