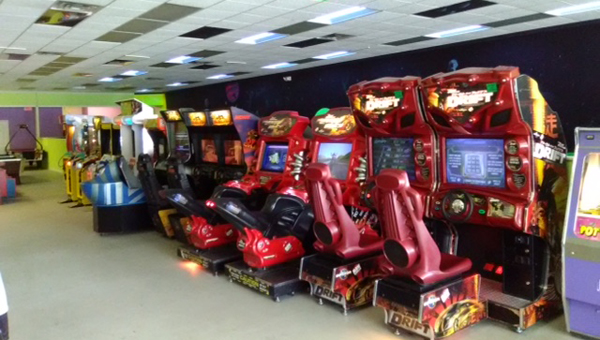 By SAMANTHA HURST / Special to the Reporter

ALABASTER— Lights—red and yellow, blue and green—flash while 10-year-olds and 40-year-olds hop from one arcade machine to the next at Hooligan’s Family Fun Center in Alabaster.

Hooligan’s opened in October 2015 and owner Ryan Sykes has been thrilled with how the business has grown.

“The support we’ve gotten from the community has just been phenomenal,” Sykes said.

On opening day, Hooligan’s boasted a modest 16 machines. Sykes said he’s grown their variety of games to 40. There are four classic pinball machines made in the 1970s and arcade classics like Frogger and Donkey Kong. Ninety-five percent of the games inside cost 50 cents to play, instead of the $2 or more that is seen in many arcades. Families can also play unlimited mini golf for $10 a day.

While Hooligan’s is open Tuesday-Sunday, Sykes maintains his day job. He said his biggest focus is growing this venture more and more so the community has a gathering place.

“I just saw the need for something for kids and families to do together,” Sykes said. “Most of the time you have the kids in their room playing console games. You might play one of those games against someone else but they don’t bring people together.”

At Hooligan’s, you’ll find grandparents teaching kids how to play pool and parents showing off their well-earned skills at Mortal Combat.

“We’ve had a lot of parents come in and they say, ‘Oh, this is what I grew up on,’” Sykes said. “It’s great to see that; to see parents getting to show their kids what they loved playing.”

“This place is great and there’s nowhere like it around here,” Nicholas said. “My wife and I have been there twice with our toddler and all three of us had a blast in the arcade.”

There are plenty of family fun centers that do ticket redemption but Sykes isn’t going for that feel. Sykes said his aim is to remain more true to the old school arcade style where the focus is more on the games themselves, not the prize you can win.

Sykes said he’s concentrating now on getting newer marque games – Guitar Hero and the Terminator Salvation are next on his list.

Hooligan’s Family Fun has also become a new location for new birthday parties. To keep up with what is going on at Hooligan’s, visit facebook.com/HooligansFamilyFun.