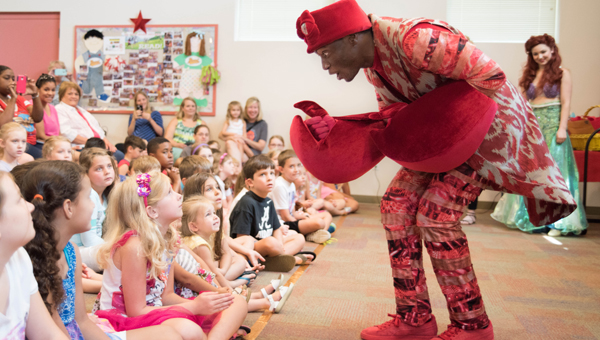 PELHAM— As Adria Grace Jenkins and Aleesa Garci sat anxiously on the floor of the Albert L. Scott Library in Alabaster, the two girls were fixated on the colorfully dressed characters standing before them.

It was the Fun Finale of the summer “On Your Mark, Get Set, Read!” program, and the library was celebrating with some special guests from Red Mountain Theatre Company.

Ariel and Sebastian the crab from Disney’s “The Little Mermaid” were there to sing songs and take pictures with the kids to make the culminating event more special.

“My favorite part was when the crab sang ‘Under the Sea,’” Jenkins said, noting how funny Sebastian was dancing around the room.

The library meeting room was packed to maximum capacity with kids clad in princess and mermaid costumes. Everyone sang along as Bernhard performed the iconic Disney song, “Part of Your World,” for the audience members.

Garcia said she hasn’t seen the movie in a long time, but “The Little Mermaid” and Ariel are some of her favorites so she was excited to see the performance. The costumes were pretty cool, she added.

In addition to musical fun, kids were able to pose for photos with the cast and get their faces painted with colorful designs.

As the event marked the end of summer reading, youth services librarian Frances Smith made sure to ask the kids how many books they had read through the program.

“How many of you read at least one book?” She asked as almost every child raised his or her hand. “How about 10, or 50?”

The largest amount of books read was about 260 books, which was more than double the amount the library awarded prizes for.

Ariel and Sebastian helped draw names for prizes, such as a new bicycle, and the party at the library continued until about noon.

RMTC’s “The Little Mermaid” is playing until July 31 at the Dorothy Jemison Day Theater in Birmingham. For more information, visit Redmountaintheatre.org.