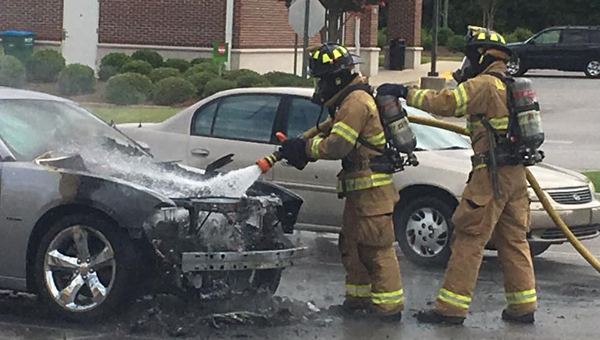 The Alabaster Fire Department responds to a car fire at the Alabaster Colonial Promenade. (Contributed)

ALABASTER— Firefighters were on the scene at the Colonial Promenade in Alabaster July 14, responding to a vehicle fire near Regions Bank and Firehouse Subs.

As a family was exiting their 2014 Dodge Charger, the front of the vehicle caught fire, according to one of the car owners. The fire department responded to the call at approximately 10:45 a.m.

Apparatus operator Shaun Barr said responders arrived on the scene, pulled the hose and were able to extinguish the fire “very fast.”

No injuries resulted from the fire, and the cause is still under investigation, Barr said.

The owner of the vehicle said responders mentioned it might have been an electrical issue with the Charger.

After the incident, Firehouse Subs invited the family in and provided them with free lunch and made sure they were taken care of while they waited.