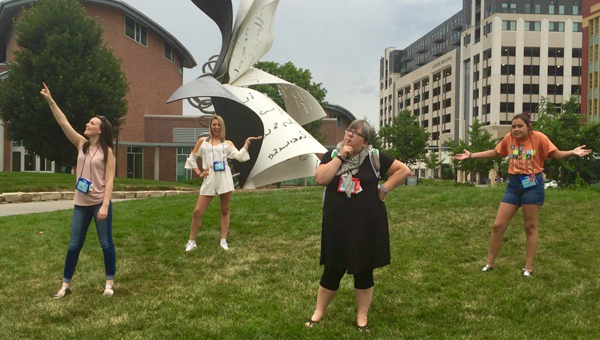 PELHAM— After spending a full week eating, breathing and living all aspects of theatre, three Pelham High School students came home with a newfound appreciation for their craft and a slew of superior ratings.

Upcoming seniors Riley Taylor, Stephanie Hernandez and Lindsay Evans travelled to the University of Nebraska June 20-25 to participate in the International Thespian Festival.

Every day was filled with auditions for colleges and scholarships, competitions, large-scale performances and more with the top thespian students internationally.

“I really think that going to international encourages them and teaches them through workshops (and) competition,” said PHS theatre director Jamie Stephenson.

International Thespian Festival is every June, and Stephenson said they’ve gone many years taking shows some years and just watching others.

This year, Pelham’s own Taylor was selected as the only Alabama representative to take part in the opening ceremony at the International Thespian Festival. She also received all superior ratings in her competition categories.

The opening ceremony, “A Spark of Creation,” was a tribute to the works of Stephen Schwartz, and Taylor performed in the ensemble.

“The talent was crazy and seeing everything come together so quickly in one day… it was really awesome,” Taylor said. “It was so awesome.”

A mainstage show was performed every night with production values in the $100,00’s. “Zombie Prom,” which was performed by a group out of Alabama, and the “25th Annual Putnam County Spelling Bee” were among the favorites of the PHS students.

The three girls lived in the dorms for the week, spending morning from night living theatre. Hernandez said there were workshops from college professors on every topic from tech to acting to audition prep.

“The workshops are more hands on,” Hernandez said. “You are there, they put a soundboard in front of you and you work on it. They give you problems and you find a way to figure that out on your own.”

Hernandez placed in the top 10 in the country for her sound work, earning a superior rating for her technical designs.

Evans spent most of her time going through the college prep courses, and said she also enjoyed going to the mainstage shows. Through her time at the festival, she said she learned she wants to peruse a bachelor of fine arts in theatre.

Each of the girls decided they might have a career in theatre. Taylor is flying to New York on July 17 to audition for a full-ride scholarship at the American Musical and Dramatic Academy, where she has already been accepted.

Hernandez said she also plans on continuing to use theatre as her outlet in the future.

“When I was doing my piece, they complimented me so much because of my age and how much I knew,” she said. “Them telling me how good I was and that I have a future in this, it’s definitely making me want to go study this.”