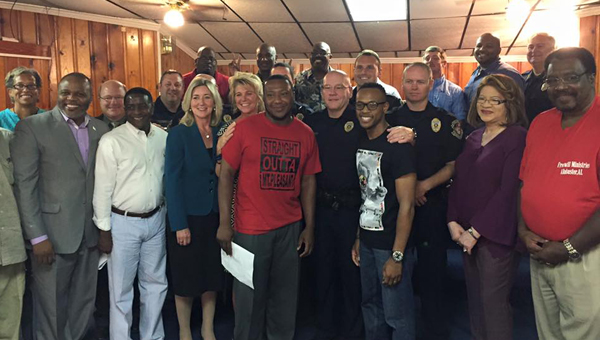 Local pastors, officers and community leaders stand together after a night of prayer and thanks dedicated to the Alabaster Police Department at Freewill Missionary Baptist Church in Alabaster on July 14. (Contributed)

ALABASTER – Police officers, community leaders and religious leaders came together to pray for the safety of the officers and city at Freewill Missionary Baptist Church on July 14.

Freewill Pastor Larry Coleman said he and his daughter decided to host the event in the aftermath of the shootings in Dallas on July 7 and other shootings that have happened throughout the country.

“We talk and talk about how we need to have change in this country,” Coleman said. “It’s time to do something, and my daughter said, ‘We need to do some heavy praying first.’”

He said he hopes their event will become a widespread idea and will help bring a change to the nation.

The night started with a welcoming by Coleman and a prayer for the strength and unity of the city. Afterwards Alabaster Mayor Marty Handlon spoke on the importance of being a tight-knit community.

“We are a city that is very much a close community,” Handlon said. “It is full of faith and love. Fortunately we have not seen the problems other cities have, and that is made possible by an effort from all of us working together to make Alabaster the great place it is.”

Coleman said the night would be impossible without the mayor’s help and City Councilwoman Sophie Martin. He said Martin was one of the first people he contacted and she was instrumental in helping make the evening successful. Martin addressed the crowd on how Alabaster is an example of unity.

“We can’t explain what happens in other parts of the world and country, but we can stay strong together,” Martin said. “At the end of the day we are all brothers and sisters in Christ.”

Coleman said he invited area pastors to lead prayers for the city, state, country and the next generation. He said it was important for young people in today’s world to respect police officers and their sacrifices.

“We have to live our lives and set by example,” Handlon said. “We have to make an effort on a daily basis to be our best selves and stand united.”

At the end of the event Coleman invited all in attendance to stand and greet someone they had never met before.

“It’s important to know your neighbors and stand together rather than divided,” Coleman said. “That is how we set an example and make the changes we want to see in this world.”