This year’s event marks the 30th year for the pageant, which is produced by the Vignette Club of Shelby County. 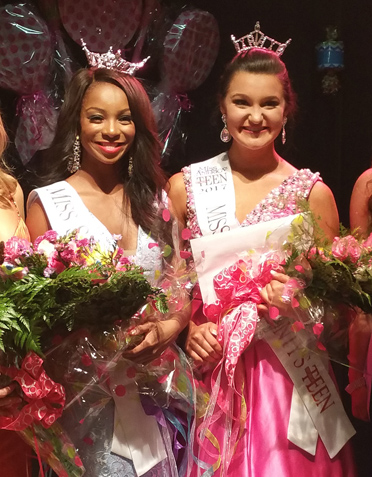 This is also the first year the reigning Miss Shelby County has won the title of Miss Alabama.

Miss Alabama Hayley Barber returned to the stage as co-emcee of the event, along with her long-time friend Amanda Ford, who was Miss Shelby County 2015.

Both ladies emceed a wonderful pageant full of talented women.

The new Miss Shelby County, Chassidy Sumler, performed a soulful rendition of the Broadway classic “Somewhere,” from West Side Story.

Sumler, who is a graduate student at UAB, also won the talent portion of the pageant as well as the Sonya Lefkovitz Community Service Award, which is awarded to the woman who best exemplifies the qualities of Lefkovitz’s life, such as a passion for serving the community.

“I’m super excited to win. God has a purpose for me and I am looking forward to getting to work on my platform,” said Sumler, whose platform is Preventing Childhood Obesity. Sumler is the daughter of Sharon and Perry Sumler and is originally from Flora, MS.

Miss Shelby County Outstanding Teen 2016 Kyra Callens passed on her crown to Blakely Channell of Alabaster, who performed a dance routine to River Deep, Mountain High by Celine Dion. Channell’s platform is Dancers Against Cancer. Channell is a student at Thompson High School. Channell also won the Lifestyle and Fitness portion of the teen pageant.

The Miss Congeniality/Sparkle Award, given in honor of the late Joyce Smith, who was a member of Vignette Club, was awarded to Julianna Moreno.

Pageant director Pam Oliver also received a surprise at the end of the evening’s event. Oliver, who has worked so closely with both Barber and Callens for the past year, will be traveling to Atlantic City in September to see Barber compete in the Miss America Pageant, which airs on Sept. 11.

Vignette Club member Carol Hill presented Oliver with flowers as well as a monetary gift to assist with travel expenses. Hill said that Oliver has “carried the torch for us the last few years” as pageant director. Hill, along with all Vignette Club members, are excited to have the reigning Miss Shelby County become Miss Alabama. It is their hope that Barber will return from Atlantic City wearing the Miss America Crown.