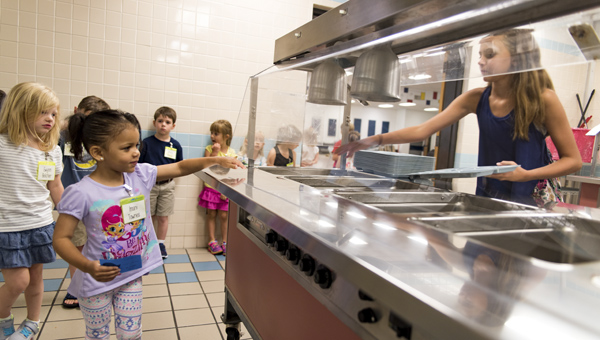 NORTH SHELBY – Transitioning from preschool to kindergarten can be stressful, but for about 40 children enrolled at Oak Mountain Elementary School, starting kindergarten will be an exciting, worry-free experience.

“There are a few (kids) that have been apprehensive, but hopefully, this will take the edge off when they come and there are kids everywhere,” Johnson said. “They’ve had the experience of an empty school and learning where things are.”

Each morning, children’s parents drove through the carpool line to drop them off at the school’s front entrance, just as they will on a normal school day in the fall.

For the next three hours, children spent time in a kindergarten classroom, visited the computer lab to practice using the computers, played on the playground during recess and learned about other places in the school, including the library.

On July 15, the last day of the first camp session, children rode a school bus to Oak Mountain Intermediate School to practice going through the lunch line with trays of food and eating lunch in the lunchroom.

“I think everything was so fun,” Max C. said on July 14. “My favorite part of having fun was going to computer lab, and what we’re doing today is going to the library.”

The students also learned rules they must follow at OMES, such as not running in the hallway, no kindergartners on the monkey bars and no more than four people in the cubby room at a time.

“We always listen to the rules every day,” Jacob H. said.

The OMES Kindergarten Kickoff Camp was among many specialty enrichment camps offered through the Shelby County Schools Community Education Program this summer.

“We didn’t really have an idea of the turnout we would get (for camp), but it’s been great,” she said. “They’ve made really good progress in just a few days.”