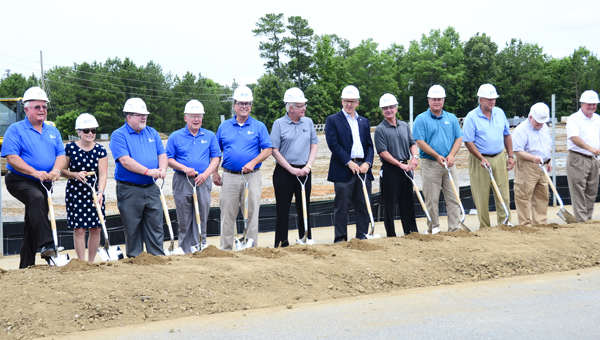 Hoover city officials mark the groundbreaking of a sports complex. The complex will be managed and operated by Clearwater, Fla.-based Sports Facilities Management.

HOOVER – Hoover will contract with Sports Facilities Management to act as manager and operator of Hoover Metropolitan Stadium and the city’s planned indoor sport and event center.

The Hoover City Council, at a regular meeting Monday, approved for Mayor Gary Ivey to execute a contract with Clearwater, Fla.-based SFM.

A motion to approve the agreement was rescinded when concerns arose over a clause that would restrict SFM from offering their services to similar nearby facilities.

Originally, a radius of 100 miles was included in the agreement, but Jason Clement with SFM said the company would prefer no such restriction be in place.

He said the company would like to have the flexibility of having conversations with other customers, possibly advising them that a planned facility would be too close to Hoover’s.

“It’s to our benefit to make sure Hoover is successful,” Clement said.

Councilmen Smith and Natter said the issue had not arisen in previous discussions and that the clause would not restrict SFM from advising other customers but from contracting with them for services.

Clement ultimately agreed to the inclusion of the clause, for the original distance of a 100-mile radius, and the agreement was approved unanimously.

SFM is to develop an operating budget; vendor and sport specific equipment selections; and organizational, operational, programming and business development, including:

•Sourcing, hiring and placement of a full-time facility leadership team.

•Formulation of a marketing/business development action plan to secure events in advance of the facility’s opening.

•Formulation of local programming to create, set up and implement such for Hoover residents to create the ground rules for the facility scheduling so that the local community receives optimal service while balancing the state, regional and national event needs.

Post-opening management and operation by SFM will include the responsibility for all aspects of oversight for the staffing, marketing, maintenance, event management, sponsorship, advertising sales and day-to-day operations of the facility.

•Approved the lowest bid submitted for the expansion of the Hoover RV Lot, in the amount of $3.9 million by C.S. Beatty Construction Inc. Other bids received ranged from $4.5 million to $6.6 million. Hoover Operation Department Executive Director Allen Pate said grading; supplying water, sewer and power services to the sites; and paving to support the weight of RVs are all factors in the cost of the work.

•Approved the lowest bid submitted for re-roofing the Hoover Public Safety Center, in the amount of $1 million by TECTA America Southeast.

•Continued until the Aug. 1 meeting a resolution to accept a bid for the Hoover Sportsplex General Works Package.

•Rejected the only bid received for repainting the Grumman Aerial Platform Fire Truck, with Mayor Gary Ivey to negotiate the price not to exceed the quoted bid amount.

•After a public hearing, approved a request from Rockwell Hoover LLC for conditional use approval for an event center for social/corporate events and live entertainment (Noah’s Event Venue) to be located at 2505 International Park Lane.

•Set public hearings for 6 p.m. Aug. 15 to consider requests recommended by the Planning and Zoning Commission, including for property owned by EBSCO and located at the corner of Cahaba Valley Road and the south side of Greystone Way to be rezoned from NZ to C-2 (Community Business District).