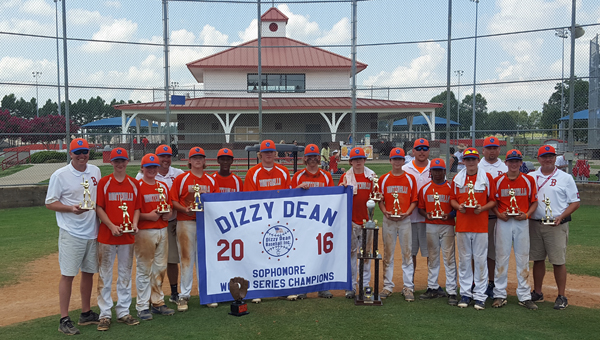 SOUTHAVEN, Miss. – The Montevallo U14 Bulldogs finished up a magical Dizzy Dean season with a World Series victory on July 20, beating the Tallapoosa Rebels by a final of 6-5. The Bulldogs entered the tournament with a 31-3 record, and had not lost a game since very early in the season, back in early May.

Coming into the tournament, Montevallo head coach Scott Butterworth felt confident about his teams’ chances in the World Series, but also knew it wasn’t going to be handed to his bunch.

“I felt really good about it,” Butterworth said. “We were hitting the ball really well and pitching it really well and defending well too. Generally if you can do two of those three things well you have a chance to be successful, and we’ve been doing all three well for a while.”

There were 18 teams in total in the tournament, and Montevallo quickly established itself as one of the top teams in the field, running through its’ first two tournament games by scores of 16-4 and 13-1 on July 16 and 17, respectively. Ethan Carter, Trent Jones and Chase Jones all saw time on the mound in the first game while Carson Monroe and Graham Blankenship pitched in game two.

The third and fourth games were no different, as Montevallo began to gain steam. The Bulldogs beat cross-county opponent, the Vincent All-Stars, in the third round of the tournament 17-0 before beating the Tallapoosa Rebels 12-0 in the semifinals; both of those games took place on Monday, July 18. Jackson Butterworth pitched the entire game against Vincent and threw a one-hitter, while Mason Blankenship and his brother, Graham, combined to pitch the next game.

The tournament was set up in double elimination format, and Montevallo’s win over Tallapoosa guaranteed the Bulldogs’ a spot in the championship game, which took place on Wednesday, July 20. Tallapoosa won the losers’ bracket on Tuesday while Montevallo had the day off before the two teams met in the championship series. The Bulldogs needed just one win to become World Series champs while Tallapoosa had to pull out back-to-back wins to be declared champions.

Montevallo came out slower than it had in the previous games, and the opening game was much more of a grudge match than the others had been. Keeping complete mental focus for the span of five days in the scorching heat is next to impossible, Butterworth said, and wasn’t completely surprised his team did not once again hammer Tallapoosa.

“It is difficult,” Butterworth said. “We played Saturday, Sunday and Monday and had the day off yesterday (Tuesday). Maybe we lost some focus with the day off. But it is so hot, and it’s just tough to stay completely focused for that long. I was proud of how the guys played in the last game.”

As the game wound down, Montevallo was behind in the bottom of the seventh, 5-4. Trent Jones and Bryan Fuller both registered hits in the game before Tanner Jones drew a walk to load the bases. Then, with two outs and the bases loaded in the bottom of the last inning of the game, Monroe came to the plate and slammed a hit out of the infield, scoring the tying and winning runs, clinching the win for Montevallo.

“These guys are really good baseball players,” Butterworth said. “They’re really good young men and they care about each other. Everything else is secondary. Unless that works, nothing else will.”

Graham Blankenship started the final game on the mound before Monroe came on to finish it. Monroe was named the Tournament MVP as well. Cody Posey, Jaxon Butterworth and Malik Inabinette were the other two members of the team, and both played crucial roles all season as well.

Butterworth also asked to thank Montevallo Mayor Hollie Cost as well as Shane Baugh, the Parks and Recreation Director, for all the help they have given the Bulldogs this summer.

The Bulldogs finished the season with a 36-3 record.